Over the past 6 months, 97 cases of violations of freedom of speech recorded in Ukraine - IMI

Over the past six months, IMI experts have recorded 97 cases of violations of freedom of speech in Ukraine. Of these, 76 were facts of physical aggression against journalists.

To compare with the last year, during the same period, there were 112 cases of violations of freedom of speech, of which 86 cases related to physical aggression.

The highest number of violations in six months was recorded in the category of "obstruction to lawful journalism" : 55 cases (slightly less than in the same period last year, when 61 obstruction incidents were recorded). 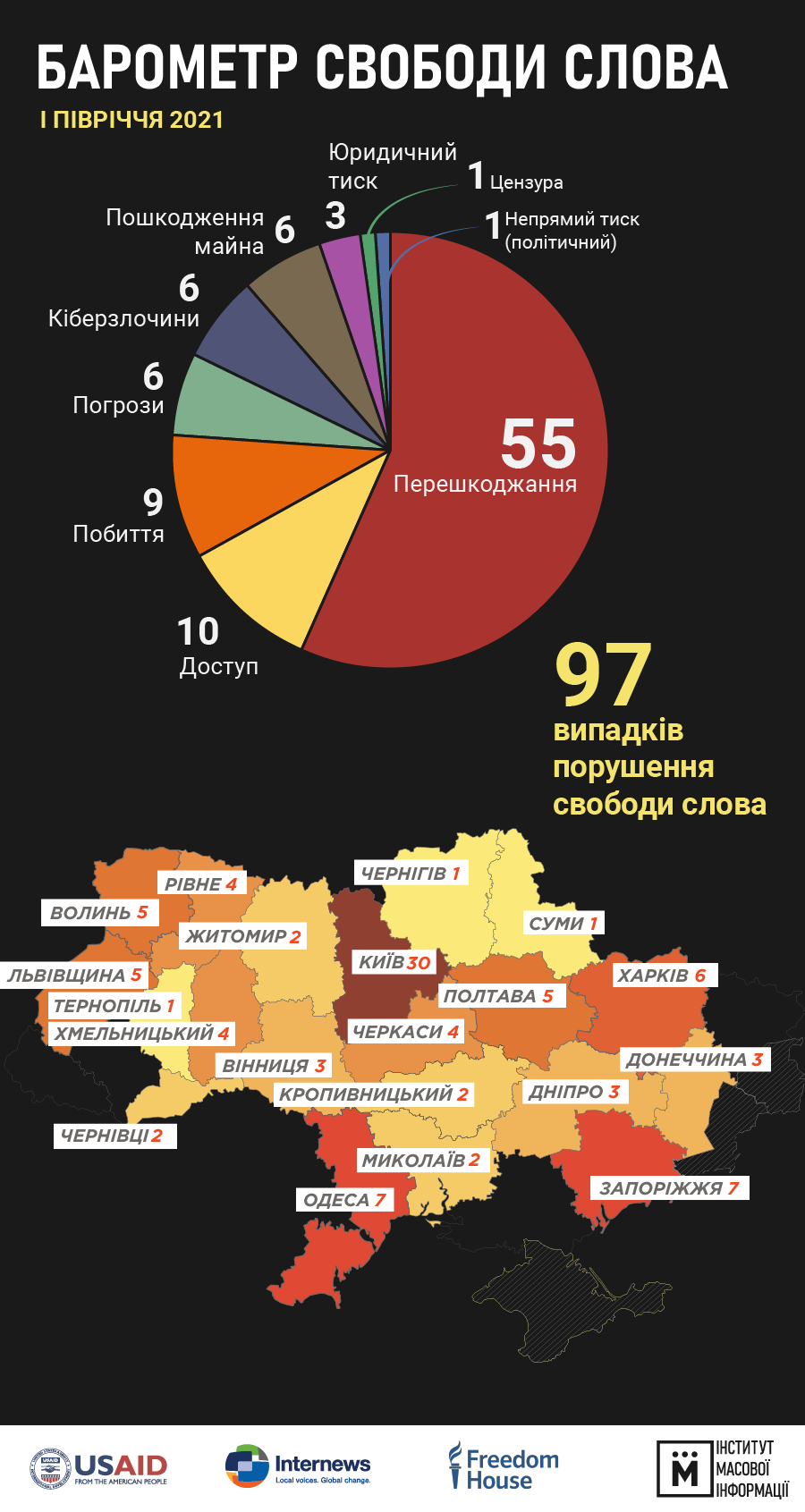 There have also been six cases of threats, cybercrime and damage to journalists' property over the past six months. Three cases of legal pressure and one case of indirect pressure and censorship.

The key trends of the first half of the year in the field of freedom of speech are physical aggression against journalists and secrecy of local and judicial authorities.

We will remind that January was "marked" by mass systematic denials of access for the press to the session of the Zaporizhzhya city council. Desparate, journalists picketed the City Council building. February was "rich" in bodily harm incidents for journalists (five people were injured). During March, representatives of the judiciary "distinguished themselves" by illegally barring journalists from open court hearings.

In April, IMI experts also noted that local and judicial authorities did not allow journalists to attend sessions, executive committees, and court hearings. In particular, journalists were not allowed to attend the City Council session in Zaporizhzhya: on April 23, Kateryna Mayboroda, the editor of the Nenachasi website , was not allowed to get in.

The case concerning the selective admission of journalists to thesis defense of the MP from the OPFL Ilya Kiva became widely known. Unknown men did not let some journalists in on April 26: journalist of the Bigus.Info project Danylo Mokryk, journalists of Channel 24, Ukrayinska Pravda and Channel 5. They argued that the denial of access was due to failure to be listed on the accreditation list. At the same time, "112 Ukraine", NewsOne, ZIK, "Pershy Nezalezhny" and others could attend the event.

In May, the anti-heroes of freedom of speech were the bodyguards of the MP from OPFL Viktor Medvedchuk and once again MP Ilya Kiva. Thus, Medvedchuk's bodyguards did not allow a number of journalists to enter the Pechersk District Court, where the politician was remanded in custody. Some media outlets were even injured: an unknown man blocked Yan Dobronosov , a correspondent for “Bukvy”, and used physical force, stragnling his throat with his hand. Medvedchuk's bodyguards also did not allow Watchers.Media journalist Stanislav Kozliuk to attend the court sitting .

Ilya Kiva prevented  journalist for Hromadske Victoria Roshchyna from streaming next the building of the Pechersk District Court in Kyiv, where the judges were deciding on a measure of restraint for MP Viktor Medvedchuk. In the courtroom, Kyva prevented the cameraman of Channel 24 from filming.

In June, judicial and local authorities, as well as private individuals, violated freedom of expression. In Chernivtsi, IMI recorded a case of property damage: the producer of the Chernivtsi branch of the Suspilne (UA:PBC) Public Broadcaster Maksym Voloshin had his car brakes cut off . This is a very serious case, as there was actually an assassination attempt. Voloshin considers this case as one that may be related to professional activity. However, he did not receive any direct threats or accusations.

In total, violations were recorded in 20 regions of Ukraine. AT the top, this is traditionally Kyiv (30 cases). The second place was taken by Zaporizhzhya and Odessa (seven cases each), the third was taken by Kharkiv region (six), the fourth was by Volyn, Lviv and Poltava regions (five each), and the fifth was by Rivne, Khmelnytsky and Cherkasy regions (four cases each).

Special mention should be made of the Kharkiv region, which ranked third among the regions where journalists' rights are most violated. In this region, during the second quarter of this year, IMI experts recorded five violations of freedom of speech. In particular, in April in Kharkiv, a On April 7, Hanna Sokolova, a regional correspondent for “Hraty” edition in Kharkiv, was barred from sitting in the Chuhuiv City Court of the Kharkiv Region. The journalist wanted to attend the court hearing of a criminal case accusing a resident of Kharkiv Ervand A. of intentional destruction or damage to the property of a gas company, arson of the Kharkiv Regional State Administration and threat or violence against a law enforcement officer. The court's press secretary, Anna Sedneva, explained the ban issued by the judge S. Obolenska with the quarantine restrictions. Another case concerns the restriction of access to public information:  Kupyansk City Council refused to give the requested information to Oleksandr Rudomanov, a journalist with the online publication LB.ua, explaining that he had not provided any identification card to confirm that he was a journalist.

The IMI sent an inquiry letter to the Office of the Prosecutor General over the case of the aggression of a journalist, as the police did not open criminal proceedings on his case. So, on May 13 in Kharkiv security guards of acting Mayor Igor Terekhov aggressed the journalist for RegioNews  Ilya Koltunov, as he tried to ask an official about perpetuating the memory of Gennady Kernes. The guards attacked the journalist, started pushing him and took the microphone.

Within six months, 44 men journalists and 37 female journalists faced prejudice to their rights.

This study was made possible by the support of the American people through the USAID Media Program in Ukraine project, run by the international organization Internews Network in partnership with the international organization Freedom House. The content is under the sole responsibility of the Institute of Mass Information and does not necessarily reflect the views of USAID, the US Government or the Internews Network.