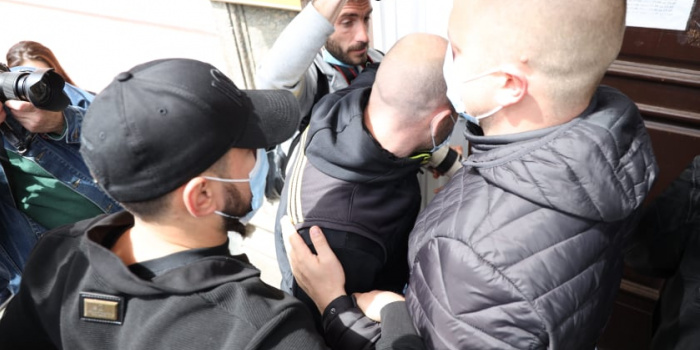 An unknown man barred the way for a correspondent for the "Bukvy" edition and used physical force, strangling his throat with his hand. The incident happened near the Pechersk district court of Kyiv, where the judge was to issue the decision on the measure of restraint for the MP from the "Opposition Platform - For Life" Viktor Medvedchuk. This was reported on the”Bukvy” website.

Besides that, Medvedchuk's bodyguards did not allow the journalist for “Bukvy” to enter the court building.

"When Medvedchuk got out of the car, people in plainclothes immediately started to bar us the way. After everyone recorded Medvedchuk, he went to court. I tried to get there too, but the guards immediately pushed me away with their hands and pulled me back. One of them pressed me down with his elbow on my throat and held for at least 10 seconds until Medvedchuk went inside. After that they blocked the passage and physically did not allow to enter ", - Dobronosov told IMI.

According to the newspaper, even before Medvedchuk's arrival, his fellow party members appeared in court, in particular Ilya Kyva, and young men of athletic build, who actually surrounded the area near the entrance.

At the same time, Medvedchuk's bodyguards thrust away the journalists. Therefore, the police did not react to this.

As for the young men who prevented the journalists from working, Viktor Medvedchuk said that they were not his bodyguards, but "patriots of the OPFL”, supporters of the party.

It will be recalled that on February 2, On February 2, as IMI reported, on February 2, Volodymyr Zelensky has enacted the National Security and Defense Council decision of February 2, 2021 on the application of sanctions against MP Taras Kozak and television channels 112 Ukraine, NewsOne, and ZIK, the press service of the President's Office has reported.

On February 25, the Administrative Court of Cassation received a lawsuit from 112-TV Television and Radio Company (112 Ukraine) appealing to the Presidential Decree of February 2 to impose sanctions on him.

On May 11, Prosecutor General Iryna Venediktova signed suspicions of high treason and attempted embezzlement of national resources in Crimea by MPs Viktor Medvedchuk and Taras Kozak.

They also helped Russia in subversive activities against Ukraine by waging an information war.