In April, IMI experts recorded 24 violations of press freedom in Ukraine. Of these, 19 were the cases of physical aggression against journalists. These were the findings of the monthly monitoring of the Institute of Mass Information “Press Freedom Barometer” *.

The highest number of violations this month was recorded in the category of "obstruction to legal professional activity" -:24. These figures have doubled compared to March (10 violations).

Representatives of local and judicial authorities were noted in this category, who did not allow journalists to attend sessions, executive committees, as well as court hearings. In particular, in Zaporizhzhya, after a short standstill, journalists were again denied access to the City Council session: On April 23, the editor of the Nenachasi website, Kateryna Mayboroda , was not allowed to enter the City council. The journalist filed complaint about the fact of obstruction. 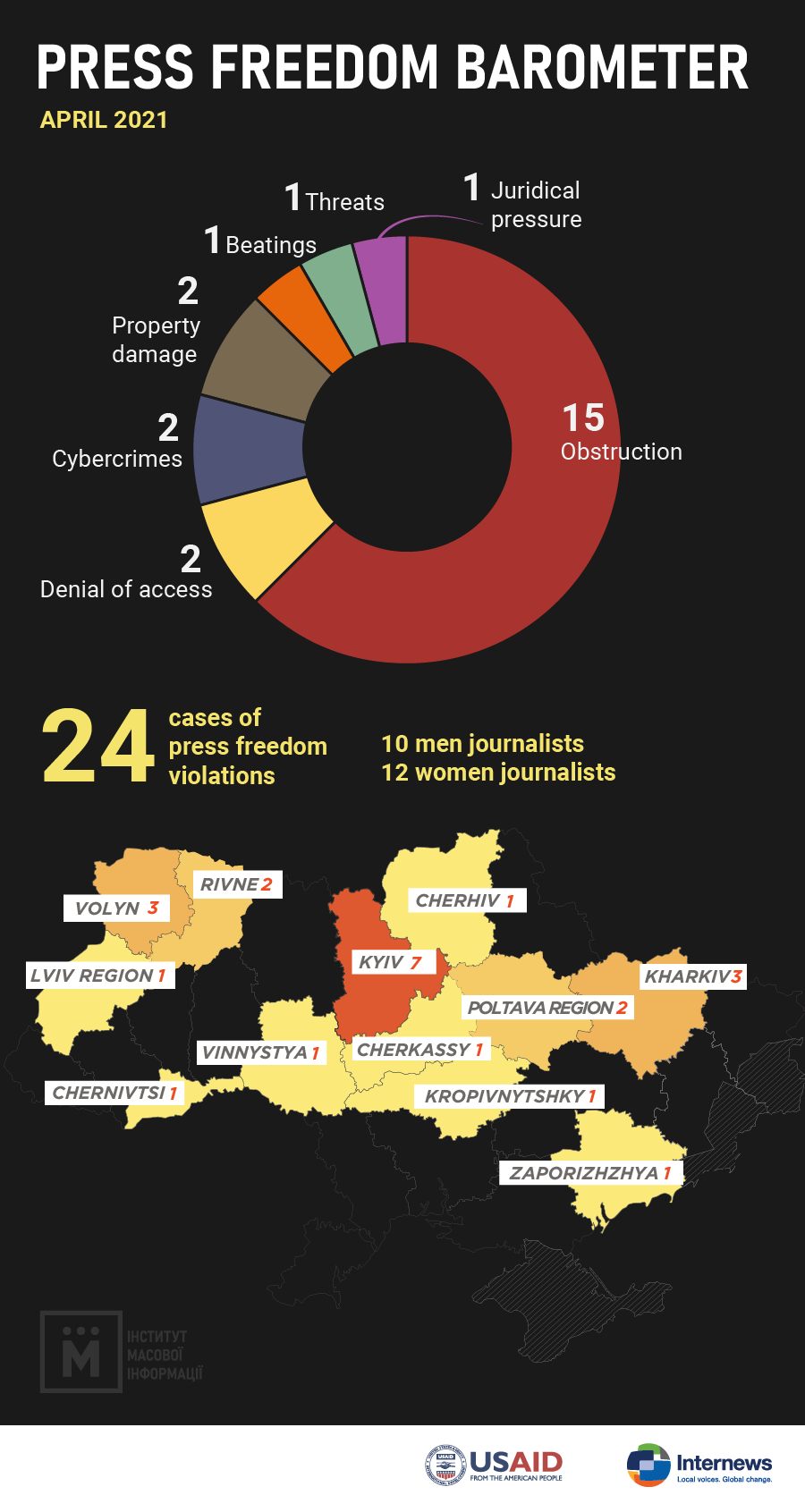 In the Chernihiv region, correspondents of the "Social. Chernihiv" TV channel on April 22 were banned from the plenary session of the Kulykivka village council. The denial of access was justified by the fact that the session was to be held closed door. Journalists lodged complaint with the police.

Journalists were also hindered in their work by private individuals. Thus, On April 26, Danylo Mokryk, a journalist with the Bihus.info project, was not allowed to attend the thesis defense of a MP Ilya Kiva. The journalist reported about it to IMI. Journalists for Channel 24, Ukrayinska Pravda and Channel 5 were also not let in. The reason for denial of access was that the journalists were not on the accreditation list.

At the same time, "112 Ukraine", NewsOne, ZIK, "Pershy Nezalezhny" and others came to the event.

Besides that, IMI recorded two cases of restriction of access to information, cybercrime and damage to journalists' property.

Among the restrictions on access is an interesting case that was recorded in the Kharkiv region. Kupyansk City Council refused to give the requested information to Oleksandr Rudomanov, a journalist with the online publication LB.ua, explaining that he had not provided any identification card to confirm that he was a journalist.

The journalist encountered this for the first time, as Oleksander told IMI. In the inquiry, he said that he was a journalist of LB.ua, and inquired about whether it was planned to rename the street named after the USSR cosmonaut Valentina Tereshkova.

One case of beatings, threats and legal pressure was recorded.

Violations occurred in 12 regions in Ukraine. The frontrunner, as usual, was Kyiv (seven cases), in Volyn and Kharkiv regions there were three cases each, two cases each in Poltava and Rivne regions, and one each in Zaporizhzhya, Kirovohrad region, Lviv region, Vinnytsia region, Cherkasy region, Chernihiv region and Chernivtsi.

In April, the main offenders of the journalists’ rights were private individuals, local and judicial officials became the leaders in violations of journalists' rights.

Thus, since the beginning of the year, IMI has recorded a total of 74 cases of violations of freedom of speech, 38 cases of obstruction, nine restrictions on access to information and eight beatings.

* The Institute of Mass Information has been monthly monitoring freedom of speech all over Ukraine by the following categories: physical aggression, censorship and access to information, economic and political pressure, legal pressure and cybercrime against the media and journalists. Only cases related to freedom of speech and professional journalism are included in the monthly report. You can read more about the methodology here .

This study was made possible by the support of the American people through the USAID Media Program in Ukraine, implemented by the international organization Internews Network. The content is the sole responsibility of the Institute of Mass Information and does not necessarily reflect the views of USAID, the US Government or the Internews Network.