Journalist for RegioNews complained about inaction of police 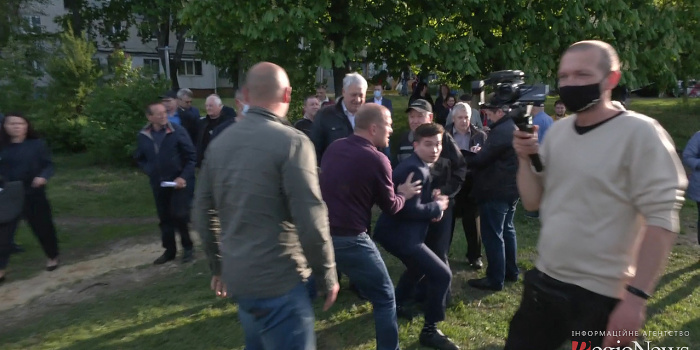 The journalist with RegioNews appealed to the Kyiv District Court of Kharkiv complaining about inactivity of the National Police, which has not yet opened criminal proceedings on his statement about the aggression he suffered from security guards of the acting Mayor of Kharkiv Igor Terekhov on May 13, as RegioNews reported.

Ilya Koltunov's complaint has been registered in the Kyiv District Court on May 17. In the space of one week, the court must decide whether to initiate legal proceedings or not.

On May 14, Koltunov filed a complaint with the Kholodnohirsky District Police Department of the police in Kharkiv Region saying that he had been aggressed by Terekhov's guards who obstructed his lawful professional activities. The complaint was duly registered by O. Yakovenko, Senior Inspector of the main directorate of the National police # 2. As required by law, such complaints must be entered in the Unified Register of Pre-trial Investigations no later than 24 hours after the registration of the complaint.

However, as of May 17, the data had not been entered into the Unified register. Ilya Koltunov complained about it to the Kyiv District Court of Kharkiv.

The Verkhovna Rada Committee on Freedom of Speech assured RegioNews that at one of the next sittings they will consider information about Terekhov's bodyguard attack on the journalist.

As IMI reported, In Kharkiv, on May 13, security guards of acting Mayor Igor Terekhov aggressed the journalist for RegioNews, as the latter started asking a question to the official..

The incident occurred during a meeting between Terekhov and residents of the Saltivka massif, when a journalist tried to ask questions about the perpetuation of the memory of Gennady Kernes.

The incident occurred during a meeting between Igor Terekhov and residents in Kharkiv. The RegionNews reported that the security guards rushed at the journalist, started pushing him and took away the microphone, and Igor Terekhov himself, as he heard the question, turned his back and walked away from the journalist.