In January, IMI experts recorded 19 cases of violations of freedom of speech in Ukraine. 10 of them were facts of physical aggression upon journalists. 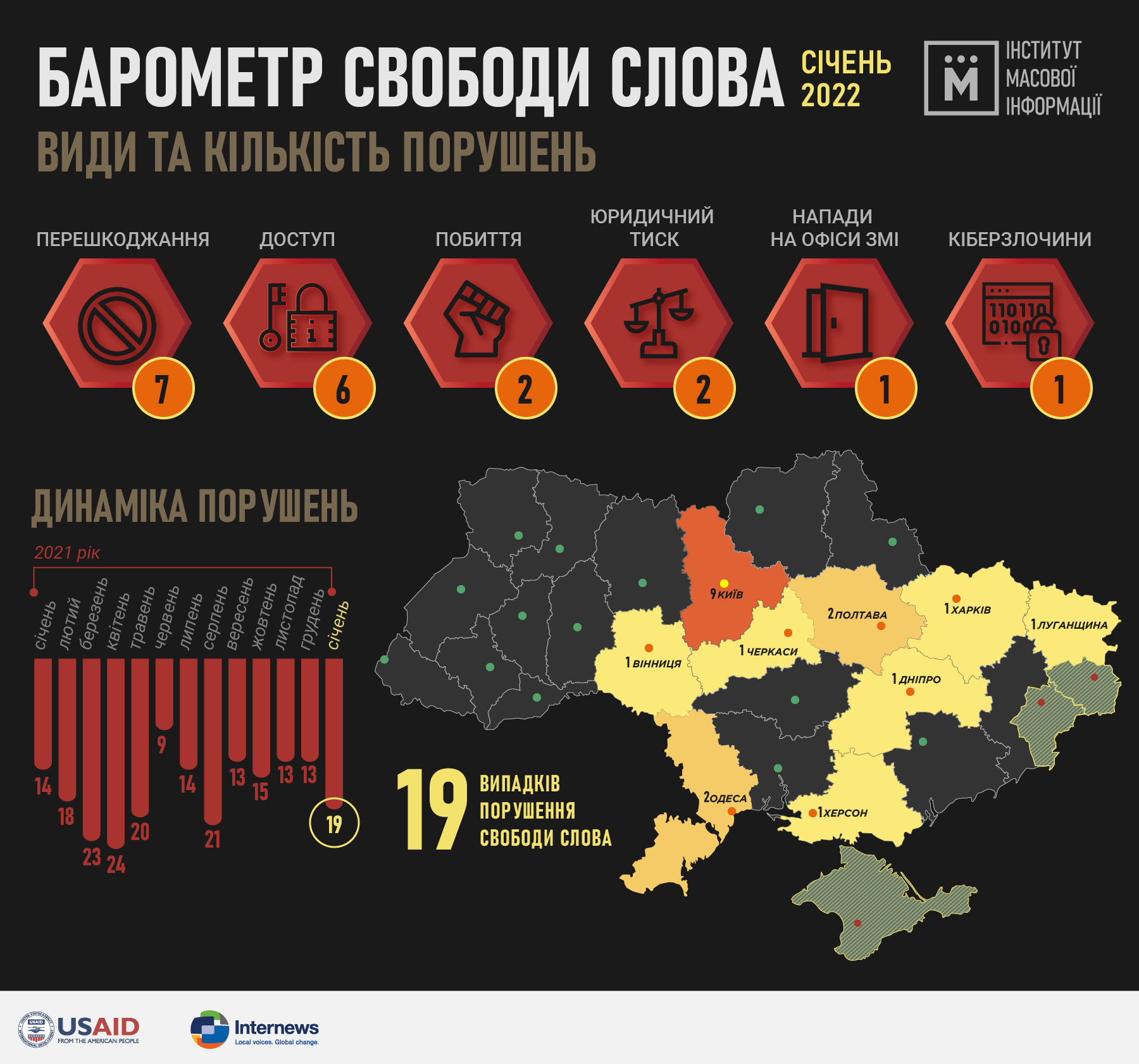 Journalists in Kyiv twice faced obstruction during protest rallies: under the Cabinet of Ministers, # SaveFop protesters tried to knock out a microphone from a Kanal 5 journalist during a live broadcast; participants in a rally in support of former president Petro Poroshenko, who was remanded in custody, prevented a Nash TV correspondent from broadcasting live.

In the Kharkiv region, the protagonist of the story courted a STB woman journalist during an interview, and then began to showcase aggression, speak obscenely to her colleagues, swung at the cameras, hit his hand on the camera tripod. In Odesa, local journalists were not allowed to attend the land commission meeting. In another case in Odessa, the security guards of the construction site forced out the film crew of the Odesa.LIVE TV channel out of the construction site.

Journalists were denied access to public information, including the Verkhovna Rada, the state enterprise Rada Parliamentary TV Channel, the Ukrzaliznytsia State Enterprise, and the Ministry of Infrastructure.

Thus, Rada TV channel did not provide information at the official request of Detector Media regarding the channel's editorial board, the results of creative competitions, etc. It will be recalled that the TV channel did not respond to IMI's request for information on budget funds for full-time and involved journalists, as well as regarding the channel's management. In addition, the Verkhovna Rada did not respond to an information request from the Legal and Judicial Newspaper regarding the use of budget funds for the purchase of the state parliamentary TV channel Rada, as well as for what purposes they intend to spend UAH 378 million from the budget.

In January, IMI recorded two cases of beatings. In Kremenchug (Poltava region), some unknown persons beat Anton Vorobyov, a journalist with the Kremenchug City Television and Radio Company Kremenchug News. The journalist was sent to the hospital. Also, StopCor journalist Ilya Shevchenko was beaten in Kyiv, as this is reported on the website.of the anti-corruption journalistic agency

The incident occurred on the evening of January 28 at the restaurant "Prince Castle". The assailants damaged badly the journalist's phone and professional equipment.

IMI also recorded two cases of legal pressure. Among them MP Ilya Kyva filed defamation action against Denis Bihus, as “Judicial Reporter” reported  with reference to the decision of the Vinnytsia District Court of Vinnytsia region from December 30, 2021. The MP from the Opposition Platform for Life faction demands 2 million hryvnias (about $70 thousand) of moral damage from the journalist, as well as to refute the information contained in the video “What Kyva’s place search found? Gold, truckload of cash and paintings. PHOTOS FROM SEARCHES”, which was published on December 1 last year.

In addition, IMI experts recorded one case of attacks on media offices and Internet pressure. In particular, Newsroom of Gordonua online edition was taken under fire on January 19, as its founder Dmytro Gordon said. He related this incident to his professional activityof journalist.

Daryna Synytska, a journalist with Poltavshchyna, was subjected to cyberbullying. Local groups on "Facebook" spread a fake news about her saying she was "a maniac who passes herself off as a girl."

Violations were recorded in nine regions. Nine cases were recorded in Kyiv, two each in Odesa and Poltava region. And one case in other regions each: in Vinnytsia, Dnipropetrovsk, Luhansk, Kharkiv, Kherson and Cherkasy regions.

The Institute of Mass Information conducts  monthly all-Ukrainian monitoring of freedom of speech in the following categories: physical aggression, censorship and access to information, economic and political pressure, legal pressure and cybercrime against the media and journalists. Only cases related to freedom of speech and professional journalism are included in the monthly report. You can read more about the methodology here.

This study was made possible by the support of the American people through the USAID Media Program in Ukraine, run by the Internews Network in partnership with Freedom House. The content is under the sole responsibility of the Institute of Mass Information and does not necessarily reflect the views of USAID, the US Government or the Internews Network.