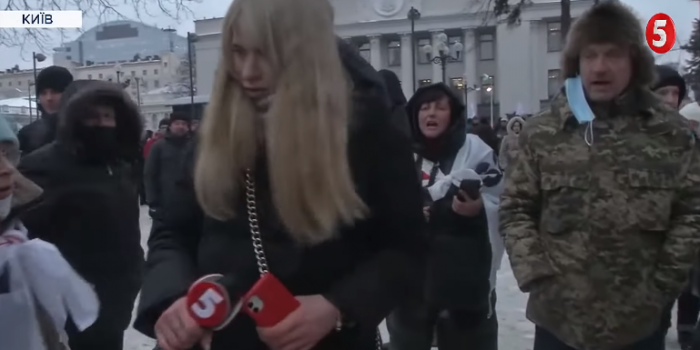 Participants of the #SaveFOP rally tried to knock the microphone out of the hands of the journalist Alina Burtseva working for kanal 5, as she was live broadcasting, as Kanal 5 reported.

The incident took place on January 25 in Kyiv under the Verkhovna Rada, where the action was held.

The correspondent was covering the protests near the parliament building. She was surrounded by individual entrepreneurs (FOPs), and after the journalist said that the protesters were spraying gas, a woman hit her on the hands, trying to knock out the microphone.

“Around 2 pm, we came here (under the Verkhovna Rada building. - ed. ) to inform the audience about what was happening here at the #SaveFOP action. I saw that for some reason the police ran away, I ran up to them and asked what had happened. They said the protesters allegedly sprayed gas on them. I have recorded it on video. I did not have time to speak about another side, just about the protesters. They (protesters - ed. ) started shouting at me saying it was a lie, pulled the plug out of the microphone, ”Alina Burtseva said.

The correspondent filed complaint with the police.

We will remind, on January 25 in Kyiv near the Verkhovna Rada the protest rally of individual entrepreneurs (FOPs) was held, they opposed the requirement to use cash registers for FOP. The requirement came into force on January 1, 2022. Entrepreneurs tried to break into parliament, but the entry was barred for them. Protesters and police clashed.