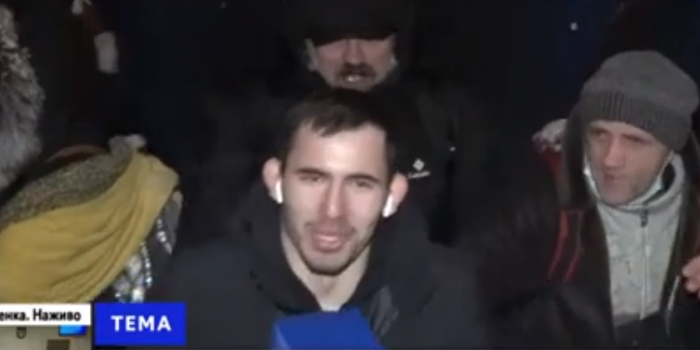 Screenshot from video of Nash TV

On January 17, protesters gathered under the Pechersk District Court in Kyiv, where pre-trial restraint was to be ordered for the former president Petro Poroshenko, used brutal force to prevent a correspondent with Nash TV channel from broadcasting live, as Hromadske reported.

The journalist Timur Strakhov tried to make a live stand up , but when he started speaking, several people pressed him down. The journalist tried to go on and even tried to take a comment from a protester.

However, he was later surrounded by a group of people who pushed the reporter and shouted "Shame on you!". The hosts in the studio called the protesters "dressed up clowns" and "a bunch of inadequate hard core nationalists."

The law enforcement officers initiated criminal proceedings under Part 1 of Art. 171 of the Criminal Code ("Obstruction of the lawful professional activities of journalists"), according to the website of the National Police. The sanction of the article envisages a fine of up to UAH 850, (about $29) or arrest for up to six months, or restriction of liberty for up to three years.

Police probe into the incident.

As IMI reported, the petition of activist Serhiy Sternenko on the application of sanctions against Nash TV channel, which was published on the website of the president of Ukraine on January 6, gathered the required 25,000 signatures. According to him, the TV channel "regularly broadcasts anti-government statements and propaganda in the interests of the aggressor state."