In July, IMI experts recorded 14 violations of freedom of speech in Ukraine. 13 of them were facts of physical aggression against journalists. These are the figures of the monthly monitoring of the Institute of Mass Information “Freedom of Speech Barometer” *.

Most violations were recorded in the category of  “threats ” (5). This month, their number increased compared to June (1). In particular, Maryna Savchenko, a journalist with the Kherson Novy Den newspaper, received insults and threats on Facebook through a publication about an road accident. Based on this fact, the police opened a criminal case over threat or violence against a journalist (Part 1 of Art. 345-1 of the Criminal Code).

Lviv journalist Maryana Sych said she was under pressure, probably an attempt to intimidate her and hinder her while preparing story for the UA: Lviv TV channel.

Yana Khmelyuk, journalist from news agency Rubrika in Nizhyn, claimed she was targeted by cyberbullying after publication of a series of stories on confrontation of local ATO veterans with the Ukrainian Orthodox Church of Moscow Patriarchate. Yana Khmelyk reported this to the IMI representative in the Chernihiv region. 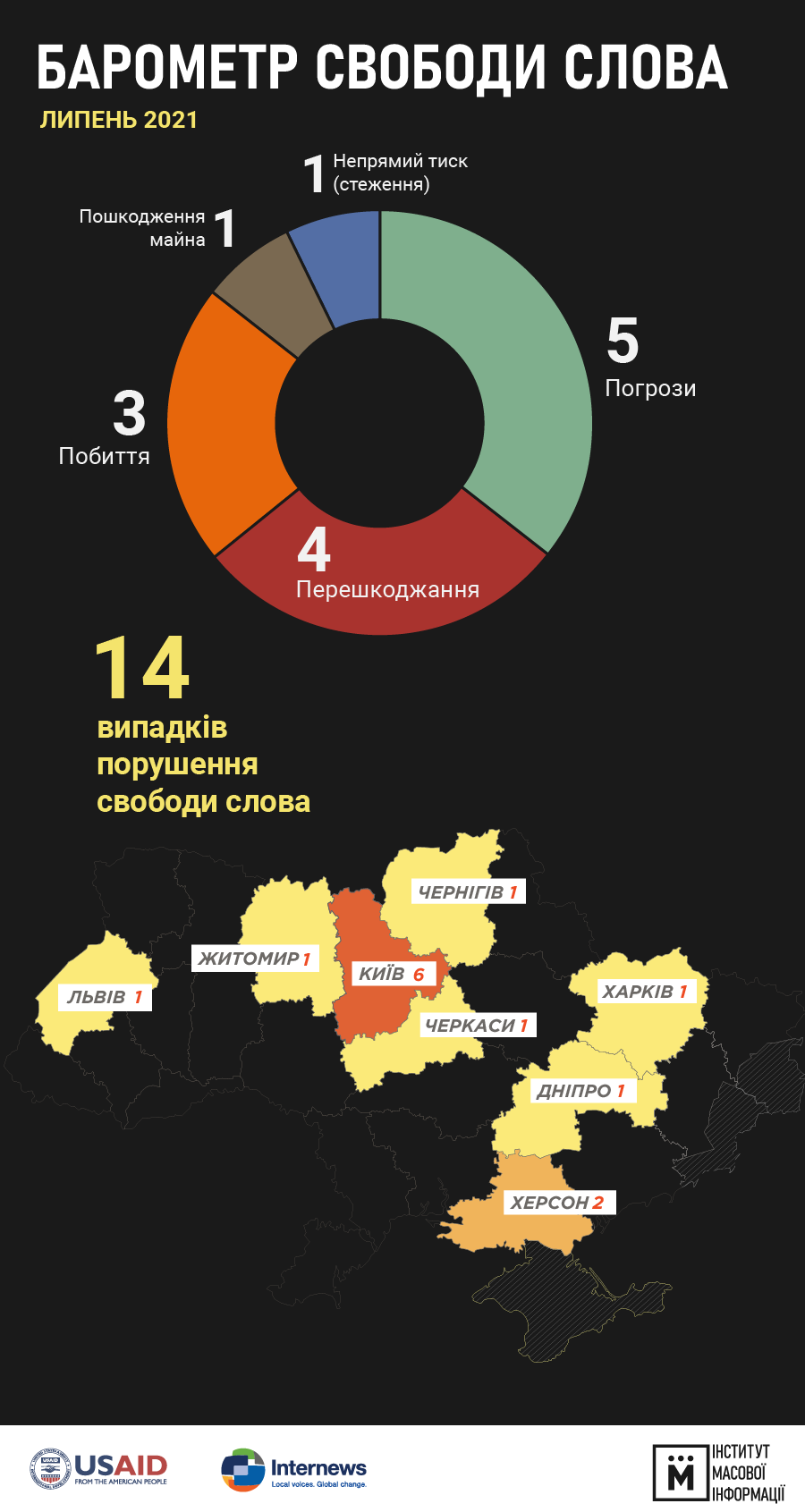 Then, in terms of quantity of violations, it is followed by obstruction to journalists: 4 (the number of such cases has not changed compared to June).

Among the obstructions we observed once again the judicial authorities restricting admission of journalists to meetings. Thus, the Pechersk District Court of Kyiv restricted the access of journalists to the hearings, issuing an order stating that this requires the consent of the judge upon a preliminary appeal. Another case of denial of access to an open court hearing was recorded by IMI in the Economic District Court of Kyiv, where the journalist of the Ukrpress.info news agency Ihor Rudych was not let in.

In two different regions, there were similar cases, they took by force the phones that the journalists used to take video. For example , in the Cherkasy region, security guards of an agro-industrial company knocked out the phone of a journalist for Procherk and deleted the filmed video files. The incident occurred on July 17, when Maksym Stepanov was covering a wrangle between representatives of the Kernel group of companies in the agro-industrial sector and Krasnogirske Agricultural LLC in a field near the village of Antipivka..

In the Kherson region, a representative of a security company grabbed a mobile phone from a journalist of the Kherson online publication, on which the latter was filming.

The third place was taken by cases of beating of journalists : 3 such cases were recorded. So, in Dnipro  as a result of clashes during the dismantling of advertising structures, the cameramen of OTV TV channel Ihor Hutnik and D1 TV channel Serhiy Faizulin were injured. Subsequently, the police reported the suspicion of three suspects in the beating of operators under two articles - under Part 1 of Article 171 ("Obstruction of the lawful professional activity of journalists") and Part 2 of Article 345-1 ("Threat or violence against a journalist").

In Kyiv on July 21, in Kyiv some representatives of right-wing organizations assaulted the journalist for Bukvy online edition Oleksander Kuzhelny. The incident occurred before the courthouse, where they considered the issue of deportation of Belarusian activist Aleksei Bolenkov, Alexander Kuzhelnyy at his Facebook page said that he was hit in the face, they spat in his face, pushed and threatened him.

In Kyiv, a police officer twice sprayed Roman Petushkov, correspondent of Apostrophe, with tear gas from a gas canister today, July 30, in Kyiv, The journalist was aggressed during riots between anti-LGBT and security forces on Bankova Street. The photographer had a camera in his hands, a “Apostrophe” badge on his chest, as well as PRESS stripes on the front and back.

In addition, IMI recorded one case of damage to journalists' property and surveillance. For example , In Novohrad-Volynskyi (Zhytomyr region), some unknown persons damaged the car of a journalist of the local online publication 4141.com.ua. He said he had repeatedly received threats through his journalistic activities.

Violations were identified in 8 regions. The leader is Kyiv (6), followed by Kherson region (2) and one case each in Dnipro, in Zhytomyr, Lviv, Kharkiv, Cherkasy and Chernihiv regions.

In July, 10 men journalists and 4 female journalists suffered from prejudice to their rights this month.

Thus, since the beginning of the year, IMI has recorded a total of 111 cases of violations of freedom of speech, 59 cases of obstruction, 12 beatings, 11 threats and 10 restrictions on access to information.

* The Institute of Mass Information conducts monthly all-Ukrainian monitoring of freedom of speech in the following categories: physical aggression, censorship and access to information, economic and political pressure, legal pressure and cybercrime against the media and journalists. Only cases related to freedom of speech and professional journalism are included in the monthly report. You can read more about the methodology here.