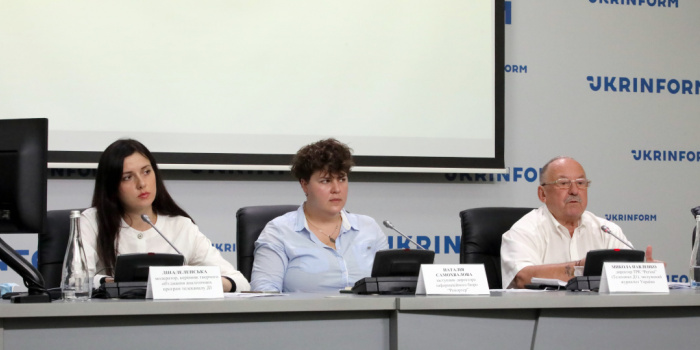 Journalists in Dnipro called on law enforcement agencies to hold an objective and impartial investigation into the beating of their colleagues. The incident occurred, as they filmed the dismantling of advertising structures on the streets of Dnipro on July 2.

The journalists said this at a press conference on the beating of journalists in Dnipro, as Ukrinform reported.

"We want an objective, impartial, in-depth investigation that will benefit not only the Dnipro, but the whole Ukraine. To make a journalist feel safe in the streets, squares, small towns and in the million-strong cities. To make him feel protected. We also want the relevant bodies and institutions to investigate the very fact of municipal guards at city councils, the legality of issuing licenses, whether they comply with the terms of these licenses, and to assess their actions during this conflict, which resulted in brutal, severe beatings of journalists, also caused damage to high-value equipment, ”said Mykola Pavlenko, director of “Region” TV and radio company.

He noted that such an objective investigation would give journalists the opportunity to feel public respect for themselves, as well as to feel safe while performing one’s professional duties.

Mykola Pavlenko added that investigation was on with interrogations, searching for witnesses and analyzing videos.

Natalia Samokhvalova, deputy director of the Reporter information bureau, noted that only five people are currently in custody, accused of beating journalists. But, according to her, there were many more people, all this was recorded on video and this evidence is available to law enforcement agencies.

Lina Zelenska, the head of the creative association of analytical programs of D1 TV channel, added that an appeal has already been directed to influential international organizations that have the levers of influence at the international level. According to her, in order not to suffer image losses in the international arena, there must be a clear response to requests from such organizations.

As IMI reported, on July 2 in Dnipro, as a result of clashes during the dismantling of advertising structures, the operators of OTV TV channel Ihor Hutnik and D1 TV channel Serhiy Faizulin were injured.

The police opened a criminal case under Part 3 of Art. 296 of the Criminal Code ("Hooliganism").