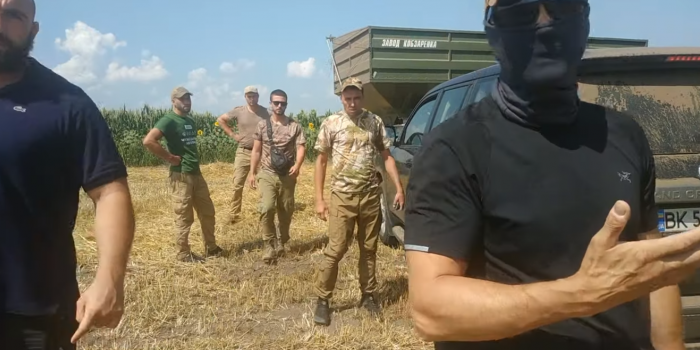 Screenshot from the video taken by Maksym Stepanov

In the Cherkasy region, several security guards of an agro-industrial company hampered Maksym Stepanov, a journalist with the Cherkasy regional online editon Procherk, to work. They knocked out the phone from the journalist's hands and deleted all video files he shot on.

The journalist reported about it to the representative of IMI in the Cherkassy region.

The incident occurred on July 17, when Maksym Stepanov was covering a wrangle between representatives of the Kernel group of companies in the agro-industrial sector and Krasnogirske Agricultural LLC in a field near the village of Antipivka.

As soon as the journalist arrived at the scene and started taking photos and videos, an unknown man from the security company representing the Kernel group knocked Maksym's phone out of his hands, and another man picked it up and deleted the files taken on the scene. However, the journalist said, later specialists managed to recover the deleted files.

In addition, security guards threatened to take the journalist's mobile phone if he continued to film them.

Maksym Stepanov called the policeand complained about obstruction to professional activity. As the journalist told the IMI representative, today, July 19, he was summoned to the interrogation department.