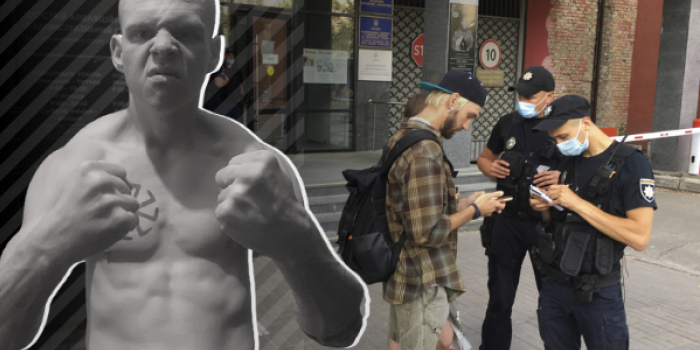 On July 21, in Kyiv some representatives of right-wing organizations assaulted the journalist for Bukvy online edition Oleksander Kuzhelny. The incident occurred before the courthouse, where they considered the issue of deportation of Belarusian activist Aleksei Bolenkov, as Bukvy reported.

Several representatives of radical right-wing organizations demanding Bolenkov’s deportation gathered near the building of the Sixth Administrative Court of Appeal.

Rght-wing extremists demanded from the Bukvy’s correspondent to leave the courthouse They shouted insults and aggressed the journalist.

Alexander Kuzhelnyy at his Facebook page said that he was hit in the face, they spat in his face, pushed and threatened him.

“I am coming to the Sixth Administrative Court of Appeal, where the case of activist Oleksiy Bolenkov was to be considered. Nationalists of various organizations gathered under the building. I take out the camera to take some pictures. Almost immediately, I see a negative reaction to me and shouts "Don't let him take pictures, he is a mongrel, leftist!" and so on. One of the organizers, Oleksiy Svinarenko, runs up and starts interfering with my work, aggressively urging others to do the same. Under the barrage of insults and threats, one of the Nazis spits in my face. I am being pushed and pressed down, ”the journalist said.

The police helped the journalist to get out of the crowd, but did not react when he was hit in the face.

“The police of dialogue finally reacts and helps to get out of crowd of young people, takes them aside. And then one of the Nazis catches up with me and hits me in the face. As it was found out, it was Russian neo-Nazi Mikhail Shalankevich. The police did not react, ”Oleksandr wrote.

A Bukv correspondent filed complaint with the police.