IMI records 19 crimes against freedom of speech in September, 14 of them committed by Russia

In September, the Institute of Mass Information recorded 19 crimes against freedom of speech in Ukraine. Of these, 14 were committed by Russia against the media and journalists on Ukrainian territory.

The Russians' crimes include kidnappings, attacks on journalists and TV towers, as well as streaming Russian propaganda in the occupied territories.

At the same time, IMI recorded 5 cases of freedom of speech violation for which the Ukrainian side is responsible. All these cases were related to restricting journalists' access to public information. 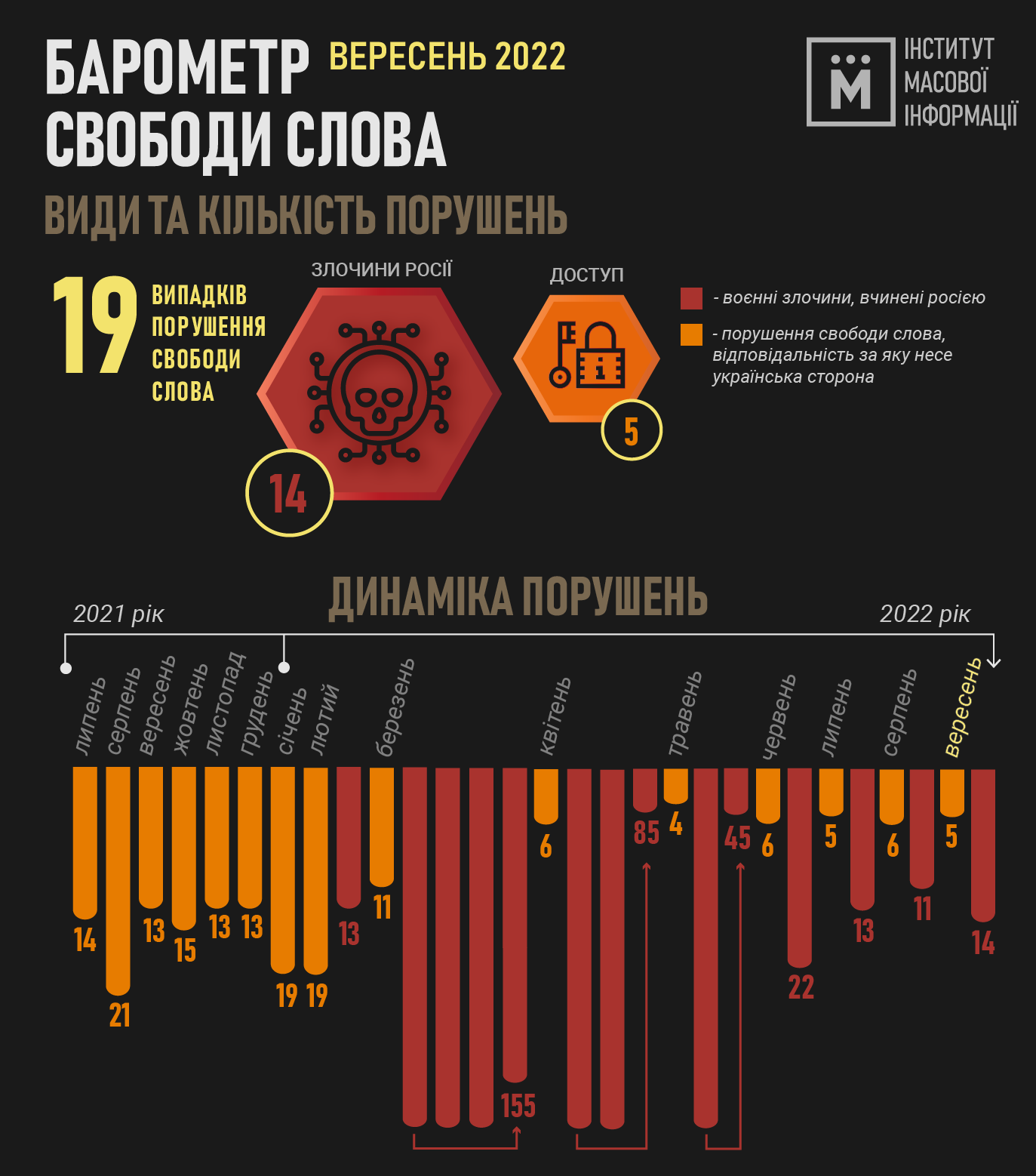 In September, IMI learned that as new territories of Luhansk oblast were being occupied, the Russian military detained three female journalists from local media and kept them in the premises of the so-called "LPR MSS" for several days.

In Kherson, the Russian occupiers also kidnapped three bloggers who had spoken out against the occupiers and supported Ukraine on social media. Among them was patriotic blogger Olena Naumova, who was kidnapped for the second time. Two more local bloggers were kidnapped along with her – Valeriy Komahorov and Olegivna29, who ran the TikTok channel koshmarik_olegivna29 and were supportive of Ukraine there. All three were forced to record an apology video for insulting the Russian military.

In Kakhovka, the occupiers kidnapped Zhanna Kyselyova, editor of the Kakhovska Zorya newspaper, and later released her.

Fakty ICTV, TSN, and Channel 5 filming crews came under Russian fire. In particular, the Russians used a drone to drop explosives the Fakty ICTV filming crew in Senkivka village, Chernihiv oblast. The attack occurred while the crew was working on a story about the aftermath of shelling in the village. The journalist, the cameraman, and the drivers were unharmed. The editors note that the enemy probably aimed at the TV channel's car. The fragments damaged the door and broke the window.

Channel 5 filming crew came under fire while working in Bakhmut, Donetsk oblast. The channel's journalist Olha Kalinovska told IMI that the shelling was targeted and massive.

The last time the Russian troops tried to target a TV tower was in Zaporizhzhia on September 22. It was not the TV tower itself, but the area around it that was damaged. Namely, TV center where the editorial office of Suspilne Zaporizhzhia is located has been damaged.

In September, IMI recorded five cases of freedom of speech violation for which the Ukrainian side is responsible. All these cases were related to restricting access to public information for journalists. These cases were recorded in Kyiv, Kamyanets-Podilsky, and Poltava oblast.

In particular, journalist, BIHUS.Info editor Maksym Opanasenko has been waiting almost a month for a response from the Verkhovna Rada Apparatus to his information request regarding the use of budget funds for the deputies' work.

In Poltava, the education department of the Poltava City Council responded to a request from Fundament journalist Nadia Kucher by advising her to search for the requested information herself.

In Kremenchuk (Poltava oblast), journalists complained about selective admission of journalists to a City Council session. Prohrama Plus and Kremenchutska Hazeta reported that only representatives of the communal TV channel KTRC were present at the Kremenchuk City Council's September 29 session.

Learn more about the monitoring here.