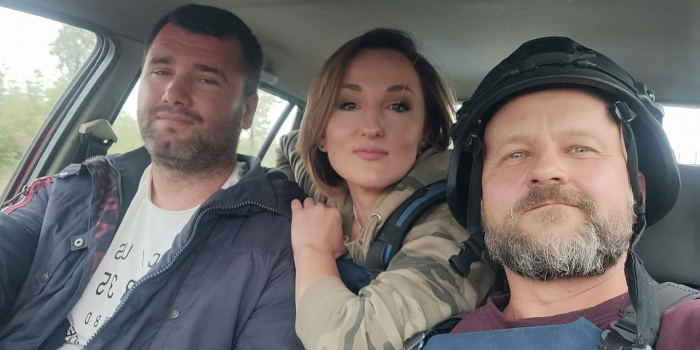 The channel's editor and journalist Olha Kalinovska wrote about this on her Facebook page.

In her comment to an IMI representative, she said that they had arrived in Bakhmut around 1:00 p.m. At first, they worked on the outskirts, near the broken bridge.

"There, we we filming the people crossing it, recording their stories. There was constant shelling in the area, but it was on the outskirts. Then, we were filming people collecting water near the bridge. The shelling was coming closer," the journalist said.

According to her, later, the filming crew moved to the city center and talked to people there. At that time, the shelling was moving closer to the center.

"After all, we can distinguish the sound, how loud it is. The elderly man whom we were talking to packed his bags and left, and we worked for a little while more and started moving along the main road towards Kostyantynivka. It is near the city council. And when we almost reached the square near the city council, we first heard a whistle, saw the shell hit for the first time. It was not far from us. The cameraman had no time to film the first hit, so he started filming the smoke. And then we hear the second terrible whistle. The second shell fell closer to us," explained Olha Kalinovska.

After that, the Russians started shelling the center of Bakhmut indiscriminately.

"People were fleeing, and we filmed everyone running away. Everyone was running to the doorways, we wanted to hide between the houses, but then realized that this is a bad idea, because between the houses you can't hear where the shells are landing. On the road, we can at least see it. That's why we decided to leave. And while we were leaving, there was whistling, and the center itself was being bombed," the journalist said.

She emphasized: the shelling was targeted and massive.

"As the military explained to us, the Russians pick a 'square' and 'take it apart.' That is, the aiming is questionable (what's the point of shelling a road), they just shoot shells en masse. And they don't care whether there are troops or civilians there," added Olha Kalinovska.

As IMI reported, TSN journalist Victoria Streltsova came under Russian fire on September 12 while holding a livestream from Kharkiv.

As IMI reported, in early May, TSN crew (Oleksandr Zahorodny, Ivan Holovach, Vitaliy Ovsyannikov) of the 1+1 TV channel came under cluster bombing in Maryinka, Donetsk oblast, during the filming.

In late May, TSN filming crew came under Russian missile fire near Bakhmut in Donetsk oblast. This happened during a live report by journalist Oleksandr Zahorodny and cameraman Ivan Holovach.