Zelensky about incident with Andrushko and Mendel : in this case, I will protect the girl 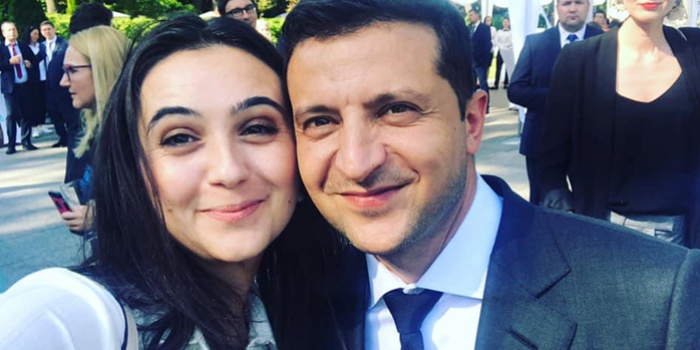 The President Volodymyr Zelensky thinks that his press secretary Yulia Mendel had no right to react in an aggressive way towards the Radio Liberty journalist Serhiy Andrushko, but he said that he would defend her in that context. He said it on October 10 at the press marathon.

At the same time, the president believes that the journalist had an incorrect and unethical behaviour.

“Can I honestly tell you? I have seen Andrushko for many times. He is a journalist. It seems to me he is behaving, I have been seeing him for several times, not quite correctly. It seems to me that a man should not behave like this towards a woman. I was forgiving Mr Andrushko his behavior towards me. This is a journalist, it’s OK. They are free. They move that way. He is a robust man. Frankly, if I hadn't been the president, I would have answered him differently, " the president said.

According to the head of state, Serhiy Andrushko has been misbehaving not for the first time.

“But he is a robust guy. He attacks, really it is. He jumps. How many times have we met him, I always shouted to my guards: guys, step away. Why? Because he will hurt them. And they will see that something threatens me, they will react according to the legislation of Ukraine. But according to the legislation, Ukraine still has some human relations. He can't beat me in the head with the microphone. One needs to have some ethics, though a little bit. I guess, very often he had been behaving unethically. Probably, this was not aired in the “Schemes” program. I think this is wrong. At the moment when, not for the first time, I say it again, not for the first time, he behaved incorrectly, ” Volodymyr Zelensky said.

The President said, he would defend his spokesperson in this context.

“Yulia, certainly, as the press secretary had no right to react like that. But there is such a word emotional exhaustion. She was already emotionally exhausted, she is human too. And she's not evil either, she's a press secretary. And she came out from your profession. And he has no right when she says : Please, he is going to come out now”. It had been happened to him many times. Anyone can be driven to this situation. She had no right as the press secretary to react like that, but as a human she could no longer react otherwise to Mr. Andrushko. And that is the reality. Because there is ethics anyhow. I do not think that Andrushko has more rights than Yulia Mendel. It is this very case that I have to say - yes, it happens once more and we will separate. Now I'm protecting her. We are human beings and I am a human being with my mistakes and she is the same. That is why I will protect the girl in this case, ” Volodymyr Zelensky said.

On October 7, the journalist Danylo Yanevskiy has filed a complaint with the Police Directorate in Solomyansky district in Kyiv about the fact of obstruction of the legitimate professional activities of Radio Svoboda journalists Serhiy Andrushko and Christopher Miller by Yulia Mendel, spokesman of the President Volodymyr Zelensky.