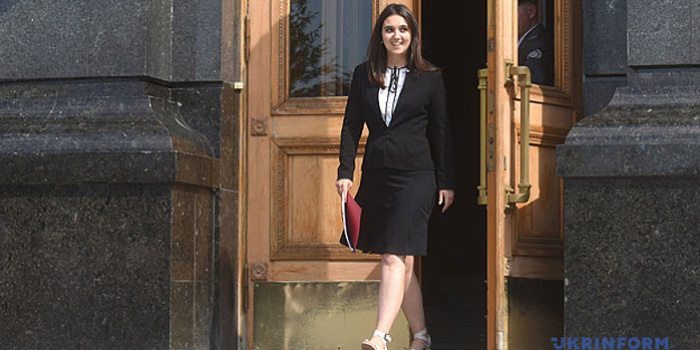 Media Movement and other media officials express concern over new trend they observe in the attitude the Office of the President has towards the journalists.

Thus, at least three journalists from Ukrainian and foreign mass media reported that they had recently been experiencing unethical and offensive behavior of the press secretary of the President Yulya Mendel, who had pushed them away, namely in order to limit the possibility of asking the President questions. These were, in particular, Natalya Shymkiv of “Livy Bereh”, Christopher Miller and Serhiy Andrushko of Radio Liberty.

In those mentioned cases, efforts aimed to restrict journalists' access to the head of state were not exerted by state security officials, what does testify lack of his security threats, but they were made by the presidential spokesperson Yulya Mendel. Such doings can be regarded as those which have signs of obstruction to the legitimate professional activity of journalist.

And the reasoning of Julia Mendel saying on Facebook that her actions against Andrushko were explaned, in particular, by the fact that, as we quote: “The mass media have to insist, not to rush on. Because this isthe personal space of the first person, this is his/her safety. It is especially important to realize it after 2017, when, pretending being a journalist from a well-known media outlet, the killer shot dead a volunteer in Kyiv, after the Radio Svoboda published integral video footage of the incident bring to mind this is blasphemy, because she was obviously aware that Andrushko did not “pretend” being the journalist.

We draw attention of the President Volodymyr Zelensky to the fact that open communication with journalists is not only a sign of democratic government, but also its duty. Given the recurrence of cases of unethical attitude towards the press from the side of the employees of the Office of the President and MPs of “Servant of the People” faction, we urge Zelensky's team to establish more constructive relations with the media. We have to point out that the reaction of the authorities to the previous incidents showed their incomplete understanding of the role of the independent media in society and their lack of willingness to normalize relations with the journalistic community.

We urge the President of Ukraine Volodymyr Zelensky personally to respond publicly to the threatening tendency to obstruct the work of journalists and the mass media by the staff of the Office of the President.

The statement was supported by mass media and NGOs:

The statement was supported by journalists:

You can join the application by sending an email to [email protected] mentioning your first and last names.

IMI reported earlier, the Press Secretary of the President Yulyia Mendel pushed away the correspondent of Radio Svoboda  Serhiy Andrushko aiming to prevent the journalist to ask the question to Volodymyr Zelensky. The incident occurred during the YES forum, which took place in Kyiv from 12 to 14 of September.

For her part, Yulia Mendel argued that she did not push away Serhiy Andrushko, and added that the journalists should not violate the safety of the first person.

On September 27, Radio Liberty journalist Christopher Miller and the journalist Natalya Shymkiv for Livy Bereh reported that they had also recently faced similar behavior from the side of the Presidential Press Secretary Yulya Mendel.