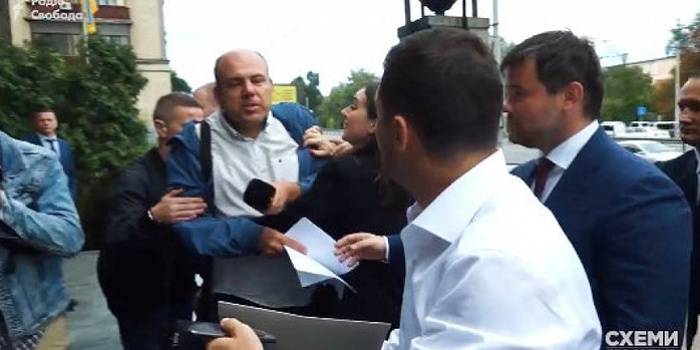 On October 7, the journalist Danylo Yanevskiy has filed a complaint with the Police Directorate in Solomyansky district in Kyiv about the fact of obstruction of the legitimate professional activities of Radio Svoboda journalists Serhiy Andrushko and Christopher Miller by Yulia Mendel, spokesman of the President Volodymyr Zelensky. Yanewski posted the complaint on his Facebook page, as Radio Svoboda reported.

Danylo Yanevsky requested to file his complaint against Yulia Mendel to the Unified Register of Pre-trial Investigations under Art. 171 of the Criminal Code of Ukraine.

According to Yanevsky, the actions of the presidential spokesman “are unlawful in terms of criminal law because, by that physical action aiming to take effect on a journalist, the press secretary committed a deliberate obstruction of legitimate professional activity the journalist was performing, responsibility for which is stipulated by the Art. 171 of the Criminal Code of Ukraine”.

Thus, as Danylo Yanevsky told, “exceeding the limits of authority, the official Yu. V. Mendel deliberately violated the journalist's right to freely collect information, made it impossible to get an access to the information for him, exercised physical action aiming to influence the journalist in order to prevent him from performing his professional duties” .

In his complaint, DAmylo Yanevsky mentioned two other incidents of obstruction to work involving the journalists with Radio Liberty Serhiy Andrushko and Christopher Miller and the presidential spokesperson.