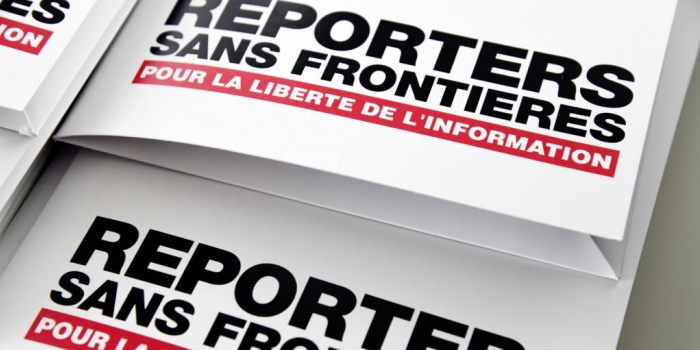 Reporters Without Borders (RSF) has filed a lawsuit against Russia on March 16 at the International Criminal Court (ICC) in The Hague, DW reported.

Human rights activists have called on ICC Prosecutor Karim Khan to probe into alleged crimes committed by the Russian armed forces against media workers during the invasion of Ukraine.

Since the beginning of the Russian invasion, at least eight journalists and media teams have been deliberately shelled by Russian troops or injured in bombings, the RSF said in a statement.

This is the RSF's second lawsuit against Russia against the ISS. The first was filed on March 4 , and concerned Russian attacks on Ukrainian TV towers.

Shakirov Dilerbek , citizen journalist of the news weekly "Navkolo tebe" (he was shot dead on February 26 in the suburbs of Kherson with automatic weapons).

Yevgeny Sakun , cameraman for LIVE TV channel ( died on March 1 during the Russian rocket attack on the TV tower in Kyiv).

Victor Dudar , the military journalist ( perished on March 6 during fights with the Russian invaders near Mykoliav).

Brent Renaud, a former correspondent for The New York Times ( shot dead on March 13 in Irpen at a checkpoint).

Pierre Zakzewski , cameraman for Fox News, is an Irish citizen ( he died on March 14 during an artillery shelling by Russian troops in the village of Gorenka, Kyiv region).

Oleksandra Kuvshinova, Ukrainian filmmaker, journalist ( died on March 14 together with Pierre Zakzewski during the artillery shelling of Russian troops in the village of Gorenko, Kyiv region).

In addition, according to IMI, at least seven journalists were injured in shelling by the Russian occupiers:

-two Danish journalists from Ekstra-Bladet - journalist Stefan Weihert and photographer Emil Filtenborg ( were injured on February 26 in the Sumy region near the town of Okhtyrka, when their car came under fire);

-correspondent of the British TV channel Sky News Stuart Ramsey ( was wounded in the shelling by Russian troops in Bucha in Kyiv region on February 28. Channel operator Richie Mokler was rescued by a bulletproof vest);

-Swiss journalist Guillaume Bricke (wounded on March 6 in the Mykolaiv region as a result of the Russian shelling of the car in which he was. He was also robbed. At the same time, the occupiers clearly saw the "press" sign on the car);

-American journalist Juan Diego Herrera Arredondo ( wounded on March 13 in Irpen near Kyiv as a result of shelling by Russian troops).

-Fox News correspondent Benjamin Hall ( was hospitalized with a serious injury he received on March 14 while preparing a report near Kyiv).

On March 18, Hromadske reported that their journalist Hromadsky, Victoria Roshchina was probably held captive by the Russian occupiers.