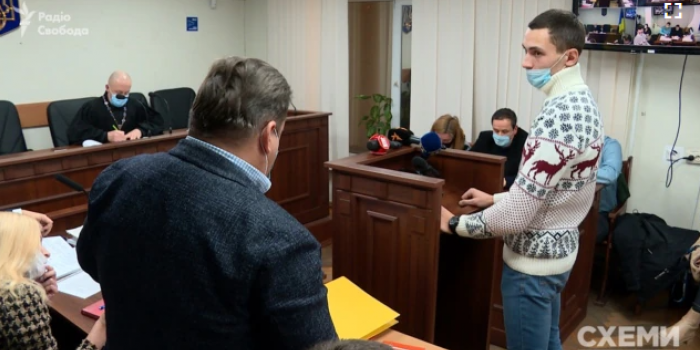 The hearing in the case of the attack in Ukreximbank on the TV crew of Skhemy program was held in Holosiivskyi District Court in Kyiv on January 17. The judges heard the victims, as Radio Free Europe/Radio liberty reported.

The journalist Kyrylo Ovsyany and the cameraman Oleksander Mazur testified about what exactly happened in the office of Ukreximbank Chairman of the Board Yevhen Metzger on October 4, 2021.

Victims also challenge the unjustified closure of criminal proceedings under the most severe, Article 146 of the Criminal Code ("Unlawful deprivation of liberty or kidnapping"), which provides for restriction of liberty for up to three years or imprisonment for the same term.

"Victims will ask about additional evidence to be joined to the case that the investigation had failed to get. In February, we expect some progress under the Article 146, which was closed by the prosecutor. I hope we will return to the investigation under this article. And this may be determinative for whether they will be jailed, "- said the defender of journalists Anatoly Popov.

The next hearing in the case is scheduled for February 9.

As reported by IMI, on October 4, 2021 in Kyiv, employees of the state-owned Ukreximbank attacked the camera crew of "Schemes" while recording an interview with the chairman of the financial institution Eugene Metzger right in his office. After being asked about the loan to DNR-linked entities, Metzger ordered the cameras to be confiscated from journalists, videos of

As IMI reported, on November 29, the Holosiivskyi District Court of Kyiv held the first preparatory hearing in the case of the assault on journalists for Skhemy program at Ukreximbank.

As IMI reported, four people accused of assault made on TV crew with Skhemy program plead not guilty. They said this in the Holosiivskyi District Court of Kyiv, where the preparatory hearing in the case ended on November 30.