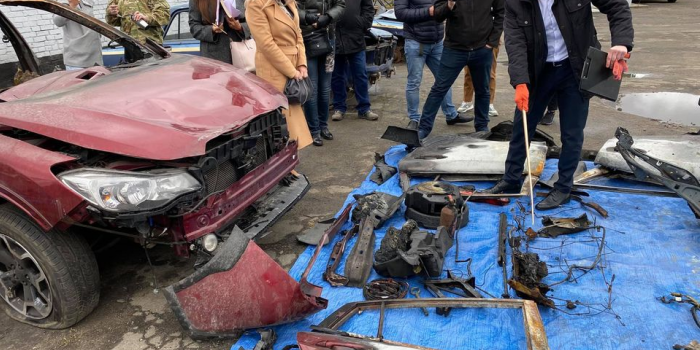 On September 21, during an extramural court hearing in the case of the murder of journalist Pavel Sheremet, the prosecutor made public the conclusions of the explosive examination, as Ukrinform reported.

Three defendants in the case - Andriy Antonenko, Yuliya Kuzmenko, Yana Duhar - and their defense attorneys, prosecutor Mykhailo Tishyn and one of the victims' representatives, as well as judges and jurors, went to the location of the carosseries which are material evidence.

After the parties returned to the courtroom, the prosecutor released the findings of the explosive examination.

Tishyn added that the expert also took into account the thickness of the car's plastic protection, the thickness of the metal, the height of the magnets, the distance between the explosive charge and the surface, as well as other data "necessary to draw an objective conclusion."

For his part, Antonenko's lawyer Stanislav Kulyk said he had doubts about the objectivity of this study.

Among other things, he said that the explosive that blew up Sheremet had not been identified, and it is still unknown what kind of explosive was used to blow up the journalist.

At the same time, the lawyer noted that he "had the impression that the prosecutor wanted to prove that in some way the MES-50 mine was connected to the commission of this terrible crime."

Kulik expressed the opinion that in this case the study was "obviously biased", and noted that the expert did not conduct sufficient research to at least exclude other explosive devices.

“We said that similar explosive devices were used in at least two other mines we know of: OZM-72 and MON-90 mine. None of these explosive devices were also taken into account in this study. So, in this case, we investigated the evidence that proves the obvious: that a famous journalist was blown up by an unknown improvised explosive device. As to all other points, we, unfortunately, did not receive any information, ”Antonenko's lawyer emphasized.

For her part, Kuzmenko noted that, in her opinion, the investigative experiment on the car was not conducted properly. And one of the representatives of the aggrieved parties, present at this meeting, expressed his belief that the experiment was not accurate and doubted that it was a MES-50 mine.

The court adjourned the hearing in the case until September 27.