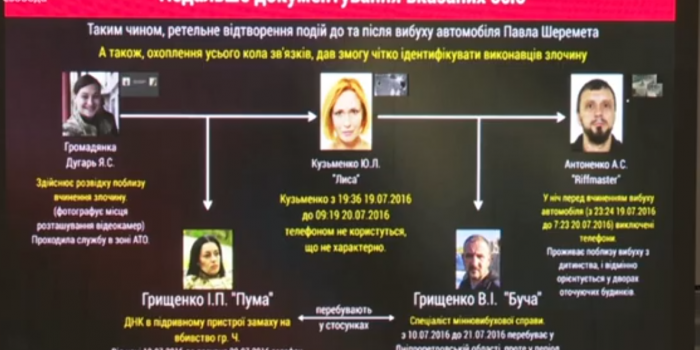 The Deputy Head of the National Police - Chief of Criminal Police Yevhen Koval named five suspects in the murder of journalist Pavel Sheremet. He announced it at the briefing on December 12 in Kiev, Radio Liberty (RFE/RL) reported.

“Thanks to search activities held by investigators and further documentation of team members one could clearly identify those persons who are objectively suspected by us as perpetrators of he murder of Pavel Sheremet. These are Yana Dugar, Yulia Kuzmenko, [Andriy] Antonenko and [Vladislav and Inna] Grischenko's spouses, ” Koval said.

As Ukrinform reported, Koval said as well that the investigation had four leads of the journalist's murder at the beginning. Afterwards, three of them were abandoned.

"The investigation continued to work on the basic version, which is destabilization of the social  and political situation in the country by means of murder of a famous person," Koval said.

According to him, working out this lead, the investigation has done a lot of work to study all the explosion incidents that occurred in Ukraine before and after the murder of Sheremet. In total, 35 such facts were established. Particular attention was drawn to the undermining of electrical support in the Kherson region in the fall of 2015 and the unsuccessful assassination attempt on businessman Ch. in the summer of 2018 in Ivano-Frankivsk, in Kosiv.

“On November 21, 2015, near Kherson region Mr Chaplinka two explosions occurred that damaged power transmission supports. One of the organizers of these explosions was someone named Nazik. Pictures taken at the scene of the investigation drew attention of the investigators to a person in clothing with a specific image on the back. Studying the circle of communication of Nazik, the police got interested in someone Antonenko. It was established that he resided in the central district of Kyiv, near the spot where the Sheremet’s car blasted, ”- Koval said.

As to the investigators, on photos on social networks Antonenko often wears clothes with specific images similar to the images on Nazik's clothes. His contacts were established with two persons - Yulia Kuzmenko and citizen K. alias Electrical specialist.

“These individuals had mutual friends and frequent meetings, in particular in the context of assistance to the military. It is significant that the citizen K. possessed certain skills of operational work and repeatedly used it to avoid that the police could gather information on him, ” Koval added.

In the course of the investigation, it was found that during an assassination attempt on businessman Ch., in the summer of 2018, an improvised explosive device was used in Ivano-Frankivsk,that was  almost identical to that used in the murder of Sheremet.

“The whole design of the explosive and the method of fixing it with neodymium magnets was absolutely similar. However, when attaching the explosive device, the malefactors did not take into account that the outer side of the bottom of the car Renge Rover was covered by a special polymer protection, so the device did not attach to it and fell. This could not but interest the investigators. The investigators established a car the malefactors used when they put the explosives which failed to detonate, ”Koval said.

The person who rented the car and brought the hostage to the crime scene was also identified.

So someone V. came in sights of the investigators.

“The spouses Gryshchenko, Vladyslav alias Butcha and Inna, alias Cougar have been identified.  It was someone V., alias Gun who drove Gryschenko from Kyivv to Kosiv. The molecular expertise has revealed the DNA traces of these individuals on an explosive device. Vladyslav Griyhchenko was the first whom the police detained, ” the official said.

“The investigative team noted that during the search activity and detention of Gryshchenko, someone K. alias Electrical specialist, who came take Gryshchenko’s car and who had been identified as involved in explosions damaging electrical supports in the Kherson region. It became clear to us that these separate groups have a lot in common, ”Koval added.

According to him, when Grischenko and his wife Inna were arrested, their friends came to court sitting to support them. In particular, there were Kuzmenko, who is a concubine of someone K, alias Electrical specialist, and someone Dugar.

“We got interested as to Dugar, Yulia Kuzmenko, Elektricalspecialist and Antonenko Andriy, who were involved in explosion of electrical supports. An extensive work began, ” the deputy head of the police said.

As IMI reported, on December 12, the Interior Minister Arsen Avakov reported that the National Police had detained and, with the consent of the GPU, pressed suspicion to those involved in the murder of Pavel Sheremet.

Earlier, the Ukrainska Pravda newspaper, citing its own sources, wrote about the alleged involvement of war veterans in the Donbass Inna and Vladislav Gryshchenko in the murder of journalist Pavel Sheremet.