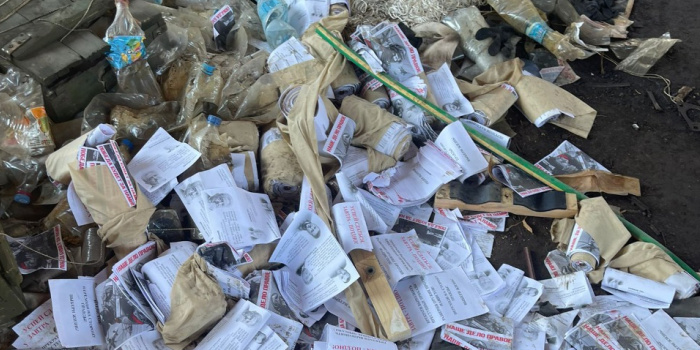 State Bureau of Investigation officers discovered a Russian storage facility on the territory of the Izyum forestry farm, Kharkiv oblast.

This was reported by the Bureau's press office.

"Employees of the SBI discovered a storage facility in Izyum city, Kharkiv oblast. The occupiers stored ammunition and propaganda materials in it to prepare for the pseudo-referendums," the report says.

The SBI noted that while the city was occupied, the 1st tank division of the Russian army had a base on the premises of the Izyum forest farm. All the worthless papers were brought here from the Russian Federation.

"Among other things, the occupiers used aviation to distribute leaflets in the occupied territories," the Bureau added.

As IMI reported, while Kozacha Lopan (Kharkiv oblast) was occupied, the Russians beat an ATO participant before forcing him to record a video address for a propaganda video. During the month he spent in captivity, the man has been beaten and tortured with electricity.

"Everywhere they had been, their newspapers were present. They were supplying them directly to the positions where the soldiers fought," said head of the International Association of Fortification Research "Citadel" Pavlo Netyosov.