Newspaper full of hatred towards Ukraine, which was supplied to russian soldiers, found in Kyiv region 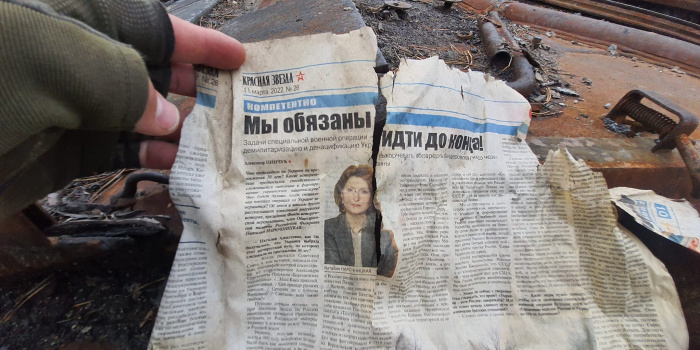 Pavlo Netyosov, head of the International Association of Fortification Research "Citadel," told an IMI representative about this.

The newspapers were found in different parts of the region: in Borodyanka, Berezivka, and Ivankiv.

"Everywhere they had been, their newspapers were present. They were supplying them directly to the positions where the soldiers fought," said Pavlo Netyosov.

According to him, they mainly found the "Krasnaya Zvezda" newspaper, its relatively recent issues – for March 2022.

"It had been printed specifically for them, for those who were standing in Kyiv region. I don't know if those who were stationed in other regions received such newspapers, but here there was a systematic and intense work of the russian federation's propaganda machine," said Netyosov.

According to him, in 2014, there were no such volumes of propaganda brought literally to the military's positions.

"Krasnaya Zvezda" has five spreads. It is an old Soviet newspaper. There is no information about internal russian issued – only information about events in the world and in Ukraine, as seen through the eyes of russian propagandists.

"There is not a single page of truth. Everything is imbued with hatred for Ukraine," said Pavlo Netyosov.

He quoted the lines that struck him the most. In the March 16 issue, at the peak of hostilities in Kyiv region, the publication writes:

According to Pavel Netyosov, russian propagandists equate the Second World War with russia's war against Ukraine.

"It poisons one's brain, affects their behavior. They clearly know that they will get away with anything, they can do whatever they want," he said.

Pavlo Netyosov noted that there is a clash between what "Krasnaya Zvezda" talks about and reality: "The reality was different. In fact, that's why they left. It was the end for them."

The researchers have passed these newspapers, like all the discovered artifacts, over to the funds of the National Museum of Military History of Ukraine. This is the main museum of the Armed Forces of Ukraine. If necessary, the authorities will be able take these newspapers later and investigate them.