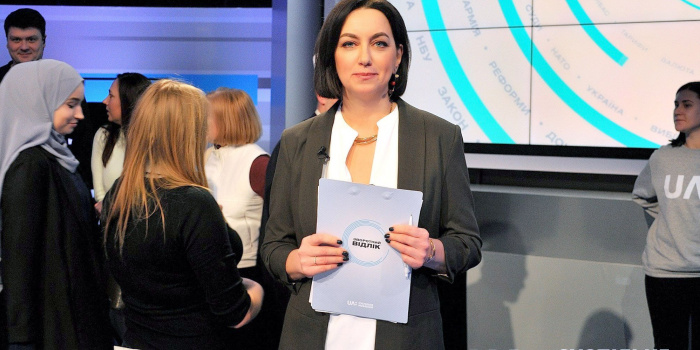 Myroslava Barchuk, the host of the talk show "Countdown" on the UA: Pershiy TV channel, found that the President Volodymyr Zelensky should not devalue and call "hype" the journalists' alarming signals about pressure on the editorial office. She wrote about this on October 21 on her Facebook page.

“It seems to me, however, that one should not lie publicly, when the real facts involving the hold over the "servants" by the OP and the agreeing the speakers' presence on the talk show is the Polichinelo’s secret. And this is the case for hundreds of journalists and presenters on various TV channels. In this case, the lie gets obvious and self-exposing to the authorities. The President should not underestimate and call the hype of journalists' alarming signals about pressure on the editorial office, because it looks like a weakness, unprofessionality and this undermines relations with the media in a whole," Myrolsava Barchuk said.

She also noted that it is the duty of the MPs is to be accountable before the people, so they should come to the air programs.

“The people's deputies take an oath to the Ukrainian people, so people's deputies go on the air programs to report to the public, it is their duty. You remember, “I swear allegiance to Ukraine. I commit myself with all my deeds to have the good of the Motherland and for the welfare of the Ukrainian people at my heart”. Not a word was said about Yermak, Podolyak and even Volodymyr Oleksandrovych Zelensky,” the presenter wrote.

Also, Myroslava Barchuk invited Volodymyr Zelensky to the "Countdown" studio of the "state television," as he called the Public broadcaster. She is also said to expect MPs from the mono-majority to come.

As IMI reported, on October 19, Myroslava Barchuk, the host of the talk show "Countdown" (Zvorotniy Vidlik) on the UA: Pershiy TV channel, stated that the staff of the President's Office was making pressure on the program.. According to the presenter, subordinates to the head of the Office of President Andriy Yermak accused the talk show of not meeting professional standards (lack of the balance of opinions in the program aired on October 18) and set their conditions for the presence of deputies from the "Servant of the People" in the studio.

“The Servant of the People” political party claimed that the President's Office did not coordinate the presence of MPs on TV channels. This is said in the party's statement .

According to the party, over the past six months, the speakers of "Servants of the People" went to 792 studio broadcasts on 21 TV channels, participated in the "Countdown" 14 times. But, as they said, as for the coordination of our team's work, it is no secret that all processes are synchronized in the triangle "mono-majority - government - President's Office." Representatives of the party's press service, faction secretariat, consultants and assistants of deputies are involved in the broadcasting of our deputies on air programs, they said in the statement.

On October 20, the Pryamiy TV channel claimed that they, as well as UA: Pershiy, have usually been under pressure from the President's Office regarding the participation of MPs from the Servant of the People faction on the

On October 20, Yevhen Muraev, a former MP and leader of the “Nashi” political party, said that the President's Office demanded him to sale Nash TV channel, threatening to revoke its license.