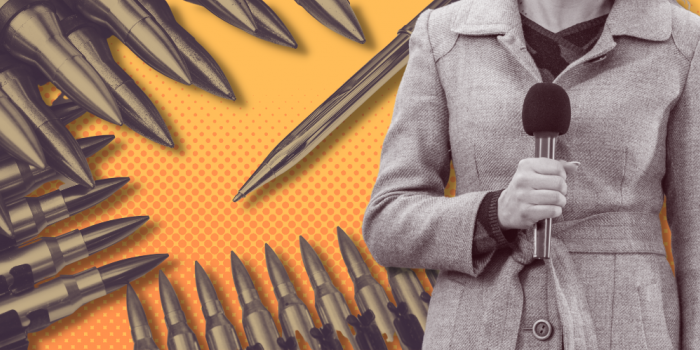 In December, IMI experts recorded nine crimes against freedom of speech in Ukraine. Five of them were committed by Russia against Ukrainian media and journalists.

The Russian crimes include firing at and wounding journalists, as well as cyber crimes, brand theft, and creating fake clones of local publications to spread aggressive Russian propaganda.

At the same time, IMI recorded four cases of freedom of speech violation for which Ukrainian citizens are responsible. These are cases of obstruction and legal pressure. 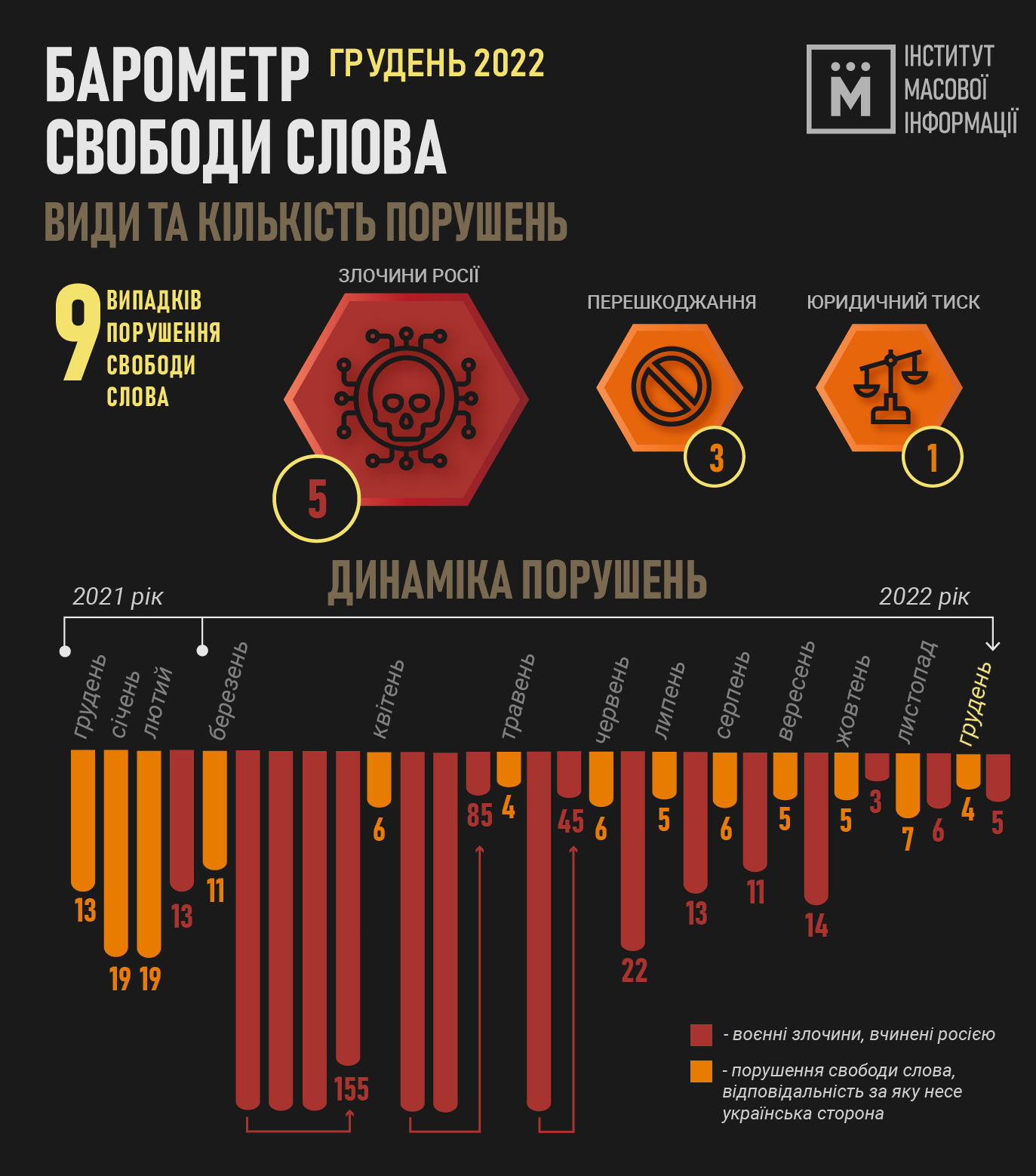 This month, "Suspilne Kherson" journalist Anton Kolomiets was killed on December 20 while defending Ukraine on the front line of the war with Russia. He joined the UAF on October 17, made his oath on November 11. Before enlisting, he worked as a presenter and director on the "Skifiya" TV channel, and later on Suspilne. For many years, he had been a weatherman. He was also the director of the "Start Your Morning With Us" program.

According to IMI, Anton Kolomiets is the 43rd media worker who died as a result of Russian aggression in Ukraine. Eight of those died in the line of duty as journalists, 35 were killed as combatants or by Russian shelling, not while carrying out their journalistic duties.

On December 19, Italian journalists came under Russian fire in Kherson; reporter Claudio Locatelli was injured as a result. Their car was also damaged. The journalists said said their vehicle had been targeted "intentionally". "If I had opened the door I would have lost a leg or worse. The car is well flagged (as carrying journalists). The attack against us, considering the place and the dynamics, was intentional. The fire came from the riverbank on the other side of the Dnieper, where the Russian army is," the journalist said.

"Telebachennya Toronto" journalist Alina Sheremeta and cameraman Oleh Arkhangorodsky came under fire while working on a report about the Karpatska Sich Battalion, about the work of tankmen and aerial scouts.

In Snigurivka town (Mykolaiv oblast), which had been under Russian occupation since March to November, the invaders were distributing a clone of the locally known newspaper "Ridne Prybuzhzhia". The Russians used the layout, typeface, and name of the regional newspaper, having translated it into Russian – "Rodnoe Pribuzhye". Editor-in-chief Tetyana Fabrykova told IMI that the Russians created a clone of "Ridne Prybuzhzhia" in order to exploit the newspaper's reputation to promote pro-Russian propaganda among the residents of Mykolaiv oblast.

The cyber crimes recorded by IMI include Facebook taking down an article by "Poltavska Khvylia" about a Ukrainian serviceman due to bots mass flagging the post. "Poltavska Khvylia" editor-in-chief Vitaly Ulybin says that their Facebook post about a Ukrainian defender who adjusts the fire of the Ukrainian artillery has been removed. He believes it is due to bots mass flagging the post. As Vitaly Ulybin explained, Facebook is blocking the post because of the video that it contains. "In the video, an air reconnaissance commander talks about how they work, what systems they use. Most likely, it is bots that are being used to take it down. Facebook itself allowed this video and even allowed it to be promoted through advertising. But time and again throughought the day, the advertising has been canceled, and the post has been taken down," said the editor.

In December, IMI recorded four cases of freedom of speech violations by the Ukrainian side. These are instances of obstruction and legal pressure. Such cases were recorded in Kyiv, Lutsk, Kharkiv, and Rivne oblast.

In the Solomyansky District Court of Kyiv, the court's spokeswoman Alyona Petukhova tore up "Watchers" journalist Alina Kondratenko's request for access to an open court session which was supposed to consider a petition regarding the measure of restraint against one of the Kyiv-Pechersk Lavra priests, suspected of justifying the Russian aggression. As Alina pointed out, the spokeswoman printed out her petition, which had been sent by email in advance, and said that it should have an electronic signature. The journalist clarified that that she had attended meetings in this court before, sending requests by email without a signature, and the court's staff had no questions. The journalist added that she did sign the printed request, which was later torn up by the spokeswoman, with a pen. In the end, the journalist was allowed to attend the court session, as she wrote a new request on the spot.

In Lutsk, the "Konkurent TV" filming crew wanted to interview the dean of a new UOC MP church, but was chased away. The news about the consecration of a new church of the Ukrainian Orthodox Church of the Moscow Patriarchate near the Lutsk bearing factory caused a stir among the locals. The journalists decided to visit the church to learn more.