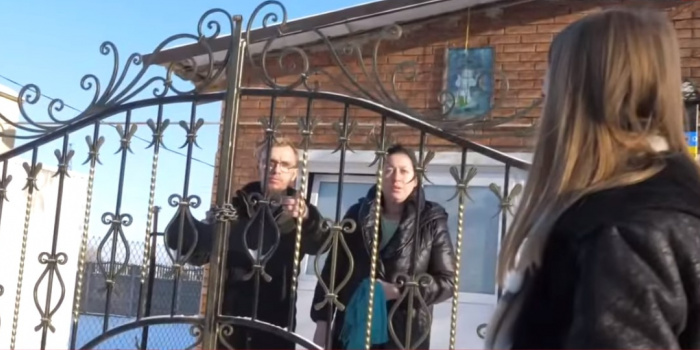 In Lutsk, the "Konkurent TV" filming crew wanted to interview the dean of a new UOC MP church, but was chased away. This is reported by "Konkurent" news agency.

According to the publication, news about the consecration of a new church of the Ukrainian Orthodox Church of the Moscow Patriarchate near the Lutsk bearing factory caused a stir among the locals. The journalists decided to visit the church to learn more.

As Oleksandra Kurteyeva, director of "Konkurent TV", told the IMI representative, the incident happened to journalist Kateryna Vozniak on December 19.

"As the journalists arrived, some people, including the dean, ran out towards them. Despite the fact that the media workers stood outside the church's premises, these people immediately started calling and shouting at them in an abusive manner – without stopping to figure out who they were and why had come," Oleksandra Kurteyeva said.

"The woman was aggressively waving her hands and shouting: 'Get out of here!' 'What do you want here!' 'Just look at the bastartds,' 'Turn off the camera,' meanwhile the man was filming everything with his phone and even said that he had written down the numbers on the license plates of the journalists' cars," she added.

Journalists did not have a chance to talk to the church's dean. Oleksandra Kurteyeva noted that no one in the film crew was injured, so they did not call the police.