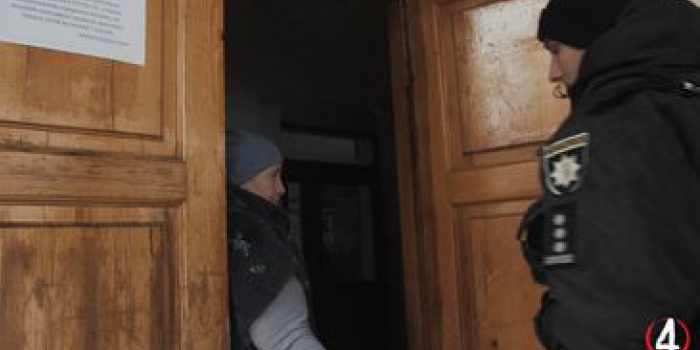 The acting principal, and then a janitor stood in the journalists' way. Photo: Chetverta Vlada

"Chetverta Vlada" were not allowed to enter Zdolbuniv Lyceum No. 6, allegedly due to martial law. The filming crew was only allowed in after calling the police; the law enforcemers talked to the school's employees, reports "Chetverta Vlada".

The journalists were inspecting the state of the premises at Zdolbuniv Lyceum No. 6. A student's mother told the reporters that the children study in inappropriate conditions, because the walls of the school's corridors are wet and moldy. According to the mother, the local authorities have ignored this issue for many years, so she wanted the journalists' help to draw attention to this problem.

Instead, the head of the humanitarian affairs department at the Zdolbuniv City Council, Ihor Antoniuk, told the reporters that the problem at the school had already been resolved. When the journalists wanted to see the state of the building with their own eyes, the official said that the mold had already been removed, and that during martial law, no one, not even parents, were allowed to enter the school, as the building was a part of critical infrastructure.

"We were not allowed inside on Ihor Antoniuk's orders. We warned him, we warned the principal that we consider this to be an obstruction to journalistic activity. At first, acting principal Tetyana Hmyrak refused to let us in. Then we called the police. A janitor didn't let us in even with the police. But the police got in, explained everything to the school officials, and they let us in," said "Chetverta Vlada" journalist Olha Pidhorodetska.