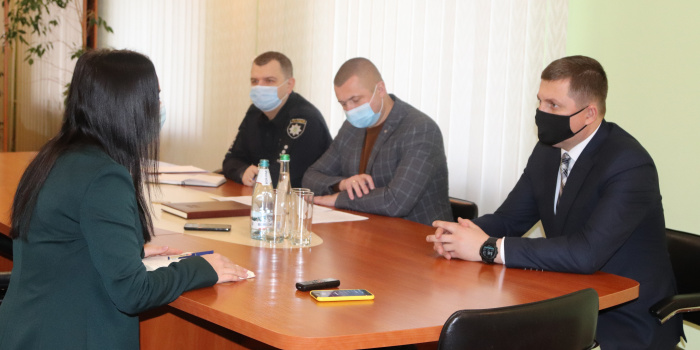 press officer of the police in Rivne region, Maria Yustytska

This year, two criminal proceedings for obstruction to journalistic activity have been opened by the police in Rivne region. As of today, both have been closed for lack of corpus delicti. Two more high-profile cases are under investigation for more than a year.

On December 10, Anna Kalaur, the IMI representative in Rivne region spoke to Oleksiy Kamyshanskyy, Chief of the Main Directorate of the National Police in Rivne and Aleksiy Askanov, head of national interests defense of the national police in the Rivne region.

IMI has already reported both cases of interference with work of journalists in 2020, which have been investigated by law enforcement. The first proceedings were opened in August 2020 at the request of Alla Maksymchuk, a journalist with the Bihus.info “Disclosure Laboratory”, to whom the State Agency for Youth Housing refused to provide information on those who had received favorable loans for the purchase of housing.

The second is about the threats on social networks to the host of Rivne 1 TV channel Anna Yatsuk in October, on the eve of the local elections.

Oleksandr Panasyuk, head of the investigation department, said that both proceedings had already been closed.

“Only two proceedings were registered, in fact there was no corpus delicti. There were some violations, but they were not qualified as criminal facts, ”Oleksandr Panasyuk said.

At the same time, police continue to investigate two crimes committed against journalists.

These are the threats voiced by the son of Viktor Medvedchuk's colleague Andriy Buzynarsky to journalist Inna Biletska in August 2018, when she approached him for comment. This was the case of an road ccident Buzynarsky Jr.had commited. He told the journalist: “You will be a corpse, putting it mildly, and at most a disabled person. Do you have children? ”

According to Oleksandr Panasyuk, they are going to appeal to the prosecutor's office again as to the possibility to press suspicion to that person.

“A draft of the suspicion was being prepared and sent to the prosecutor's office, but the procedural prosecutor, unfortunately, does not see the possibility of pressing suspicion due to the fact that the actions of the person who committed the illegal acts did not reach, say, the moment that would allow to declare him a suspect. We will apply to the prosecutor's office again. I think that if no decision is made on the pressing suspicion, a final decision will be made on this proceeding, ”he said.

Asked by the IMI representative whether the prosecutor's office did not consider Buzynarsky's words recorded on the video as sufficient, Panasyuk answered: “Unfortunately, no. You see, any threat of murder must be obvious. There must be some tools that, for example, could indicate that this intention is real. "

In addition, the police have been investigating another crime since 2016 - the arson of the car of a 1 + 1 ex-journalist and Rivne City Council deputy Oleksandr Kursyk.

“A large set of actions has been taken in this proceeding. Unfortunately, we cannot detect everything by means of operatively and investigative actions. The proceedings are being investigated, no decision has been made in it, measures are being taken to detect it, ”Oleksandr Panasyuk said.

According to Oleksandr Panasyuk, the deputy head of the State National Park, the number of crimes against journalists in the Rivne region has decreased this year.

As IMI reported, on December 10, the head of the Main Directorate of the National Police in Rivne region Oleksiy Kamyshanskyi during a meeting with a representative of IMI said that the police will try to resolve the issue with the admission of journalists at local council sessions.