The Media Movement speaks out against the strengthening and reorientating of the state-owned media (including the Dom and Rada TV channels), which have recently taken place at the behest of the head of state, his team and the Servant of the People parliamentary faction. We emphasize that the attempts to develop a number of state-run TV channels for the Ukrainian audience in parallel with the Public Broadcasting system are a backtracking on democratic reforms and contradict Ukraine's international standards and commitments.

First of all, as it became known from the calendar of sittings, the Verkhovna Rada is going to consider the bill №4487 “On Amendments to the Law of Ukraine“  on Ensuring the Rights and Freedoms of Internally Displaced Persons” in the second reading on January 27. Taking into account the amendments supported by the committee in December, the bill proposes to include a de facto Russian-language state TV channel for residents of the occupied territories Dom TV to the Universal Program Service, which is a list of channels that must be broadcast by cable operators to all their subscribers throughout Ukraine (beyond Suspilne pPublic broadcaster and Rada).

It will be recalled that during the election campaign, Volodymyr Zelensky promised to launch a state Russian-language TV channel for residents of the occupied territories, where currently Russian TV channels are prevailing. Such a channel Dom appeared in 2020 on the basis of the state enterprise "International Platform of Foreign Broadcasting of Ukraine". However, last year Dom launched a 30 million of hryvnia advertising campaign in which the broadcaster's billboards were placed everywhere in Ukraine, and President Zelensky said he wished to expand Dom's broadcasting to all internally displaced people in the free territories of Ukraine.

In addition to the prospect of extending the content of the state propaganda channel throughout Ukraine, this bill carries other risks: the impact on the political discourse of the state-owned broadcaster in the interests of the current government, not of society. The information needs of migrants in the free territories are now fully met by a significant variety of public, commercial and municipal television channels, and there is no reason to set a precedent for their information segregation.

Equally alarming is the transformation of the Rada parliamentary TV channel launched last December and its filling not only with broadcasts of plenary sessions, but also with studio projects produced by third-party productions, where political technologists with tarnished reputation subjectively and unbalancedly "explain work" of the parliament, which can be seen as influencing political discourse in the interests of power.

It should be noted that the state budget for 2022 provides for the allocation of 378 million hryvnias for the needs of Rada TV channel, which is a significant increase in funding for the broadcaster, almost sevenfold. At the same time, the management of the TV channel does not provide direct answers to the requests for information on distribution of funds, which may indicate non-transparent use of budget money. In fact, the reform of media privatization has not affected the parliamentary TV channel, and the current steps to strengthen the channel only worsen the situation. We consider it inadmissible to allocate 378 million hryvnias from the state budget to finance the Rada TV channel in the form in which it operates after the "renovation".

Reforms in the media sphere, launched after the Revolution of Dignity, were aimed at eliminating state control over the media : the privatization of the press and the transforming the state television and radio companies into Public Broadcasting, whose editorial policy the state can not interfere.

That is why we call on the president Volodymyr Zelensky and the Servant of the People faction to abandon plans to include the state-owned channel Dom to the Universal Program Service in order to extend its broadcasting throughout the country, and to use the Rada TV channel for its own political and technological purposes.

We also call on Ukraine's international partners to closely monitor Ukraine's compliance with its obligations to eliminate state control over the media, as well as to ensure appropriate conditions for the development of public service broadcasting, including its full-fledged funding.

Media Movement is a community that brings together journalists from leading Ukrainian media, investigative journalists and experts from media NGOs.

On November 16, 2021, representatives of the prominent media called on journalists to unite themselves inside the professional community to resist political and commercial pressure on freedom of speech. The statement was initiated by 29 journalists and experts, whose names are available at the link.

Today, the unification of the two initiatives is under way. The full list of members of the renewed organization will be opened immediately after the formalization of the Media Movement. Currently, the initiators of the movement are developing the rules of the organization, its organizational structure and internal regulations. 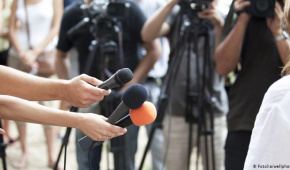 NGOs opposed against state group of companies for television and radio broadcasting
News
Ministry of Defence has accredited 8727 journalists to work in the combat zone
Man leaking the UAF movements on TikTok to face trial in Lviv region
Amnesty International announces the rise of execution rates in the world
Zaporizhzhia website inform.zp.ua threatened from russia again
Do you want to be first to learn about the new research of the Institute of Mass Information? Subscribe to the newsletter!