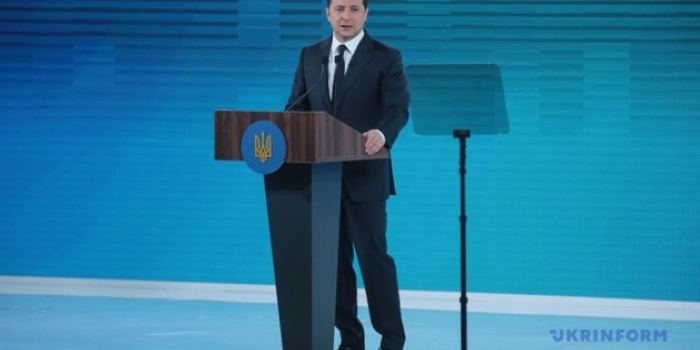 “Free speech and propaganda, misinformation are constant companions of news. Today, there is an news war between them. A war where battles take place not in the fields, but in the cyberspace. A person is hit not with bullets but with fake news. In this war, as in the classic one, millions of living people can be victims, "the president said.

He mentioned Russian fake news about the "crucified boy", "the train of fascist punishers", "we are not here".

"No less dangerous is the fact that our country is being attacked by information not only from the outside, but also from within. When "great patriots" lie to Ukrainians about Novy Sanzhary; that service men at the front are forbidden to shoot; about borscht plates. Or when they call a vaccine a word that actually describes the nature of their actions. After all, in the pursuit of their own popularity, they are ready to jeopardize the safety, life and health of Ukrainians,” as Zelensky said, alluding to the fifth president, Petro Poroshenko, and his mass media.

He clarified that the consequences of the information war are fear, panic, aggression, etc.

“These are made-up opinion leaders [Anatoliy Shariy], who have a better idea of ​​how to live in Ukraine from Spain. These are mass disinformation media that disgiuse the sabotage on the instructions of the aggressor with freedom of speech. We have made and continue to work so that these channels aired only the TV test chart. And on the Internet, in particular on YouTube, they have been banned for life, ” he added, referring to Medvedchuk's channels: 112 Ukraine, NewsOne and ZIK.

In addition, the President reminded that the Center for Countering Disinformation would be launched in Ukraine soon. He wants the center to become an international hub against misinformation and propaganda. The head of state also added that media literacy lessons should be entered in the school curricula.

As IMI reported, on February 16, Minister of Culture and Information Policy Oleksandr Tkachenko announced that the Center for Countering Disinformation would start operating in Ukraine in March .

On February 2, the president Volodymyr Zelenskyi enacted the decision of the National Security and Defense Council of February 2, 2021 “On the application of personal special economic and other restrictive measures (sanctions)”, which provides for five years of sanctions against MP Taras Kozak and legal entities licensed by 112 Ukraine, NewsOne and ZIK TV channels..

In a statement, TV channels criticized the sanctions and called the government's decision a "political crackdown on unpopular media."