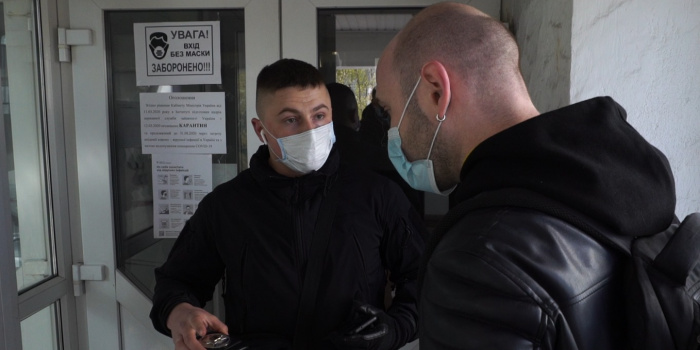 The State Bureau of Investigation did not open proceedings after the complaint from the journalist for Bihus.info Danylo Mokryk. The journalists had complained about obstruction by police officer Yuriy Ruzanov, who did not allow him and other journalists to attend thesis defense of Ilya Kiva, a MP from the “Opposition Platform - For Life” party. Danylo Mokryk said it on May 12 on his Facebook page.

Last week, the journalist filed complaint over the fact of obstruction to his professional activity with the State Bureau of Investigation. As Mokryk said: "Every fact was described and lot of videos recording denial of access presented."

But the SBI replied that they considered Mokryk's complaint as a citizen’s appeal.

"Today, the SBI sent the response. No, they did not enter information into the Unified Register of Pre-trial Investigations and did not begin an investigation as they should have done by law (Article 214 of the CPC). They interpreted the complaint as an appeal from citizens. And they handed him over to the Kyiv territorial department of the SBI. The complaint titled with a sounding heading “The complaint about commission of a criminal offense, according to Art. 214 of the Criminal Procedure Code of Ukraine ” renamed as the citizen’s appeal. This is all you need to know about "responsibility for everyone", "unavoidability of punishment" and "no one covers up the police" in Ukraine, "Danylo wrote.

As IMI reported, the State Institute for Training of the State Employment Service of Ukraine, where People's Deputy Ilya Kiva defended, acknowledged that despite the requirement of open-door thesis defense, the MP’s assistants set up "accreditation" for the press, and security guards did not come between the hugs for hire and the journalists.

On April 26, Danylo Mokryk was not allowed to attend the thesis defense of a MP Ilya Kiva. The journalist reported about it to IMI.

Last year, courts issued 41 sentences for online offenses
Blogs
Sanctions against Medvedchuk’s TV channels. The first estimates
Do you want to be first to learn about the new research of the Institute of Mass Information? Subscribe to the newsletter!