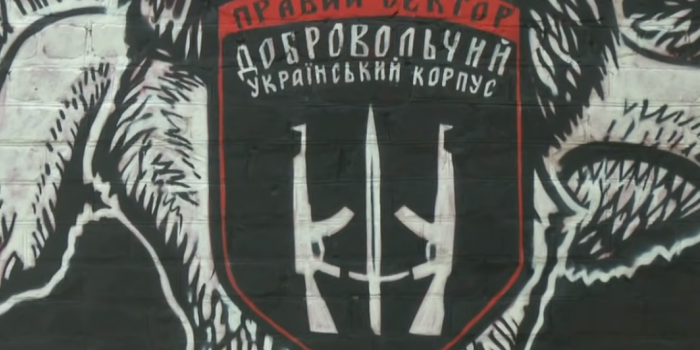 SCreenshot from the video of Channel 5

The Russian Federal Service for Supervision of Communications, Information Technologies and Mass Communications (Roskomnadzor) has required from Channel 5 to take down a report on “Pravy Sector” from its website, as Channel 5 reported.

Roskomnadzor demands to take down the report of journalist Olga Kalinovska of July 20 "Third Force" at the front: "The Pravy Sector celebrated the 7th anniversary of its creation - the battle route of volunteers."

The Russian agency sent Channel 5 a letter informing about the restriction of access to this material as such, which “contains calls for mass riots, extremist activities, participation in mass (public) events held in violation of the established procedure, information materials of organizations whose activities have been recognized as undesirable, unreliable socially significant information disseminated under the guise of reliable messages ”.

According to the channel, the channel regularly receives similar letters from Roskomnadzor on its YouTube channel.

Channel 5 journalist and presenter Olga Kalinovska considers this as a distinction and believes that the channel makes the right materials.

“In the reports , the "Pravy Sector" is recognized as a terrorist organization. For us, it is a recognition that we are doing everything right, giving the right materials to protect our security, showing our heroes, glorifying our heroes, showing our modern history. And the fact that it bothers Russia, like "good boots, you have to pick them." So, we need to move in this direction. The fact that Russia is angry and upset does mean that in the media lanndscape, in terms of information, we are doing everything right, and we need to move in the same direction, ”she commented.

She also added that Russian legislation does not apply to Ukraine: “These are their (Russian - ed.) rules there, their prohibitions. It does not concern us at all. These are our heroes, these are our glorious warriors. What affects them is their problems. We also tell our story about our heroes. ”

As IMI reported, in July, Russian media watchdog (Roskomnadzor) has demanded from Ukrainian online publication “Bukvy” to take down the news about a "military conscription" in the Russian-occupied Crimea. The Federal Service for Supervision of Communications, Information Technologies and Mass Communications (Roskomnadzor) sent such notification to “Bukvy” over the news item "The Ukrainian Foreign Ministry is demanding that the Russian Federation cancel the call-up for military service in the Crimea", published on October 3, 2017,

As IMI reported, on July 12, the Crimean Human Rights Group claimed that their website was blocked in the Russian-occupied Crimea due to the publications about illegal military conscription on the peninsula

On June 8, the Kropyvnytskyi publication Grechka received a letter from Roskomnadzor saying its edition was put on the list of sites that disseminate information which was banned in Russia. The regulator demanded to take down site the material for 2015 "In Russia, teacher condemned for poems in support of Ukraine and mentions of the UPA."from the

On March 31, Hromadske reported that Roskomnadzor was going to block their video from July 12, 2015. In it, the "Pravy Sector" officials told their version of events in Mukachevo in 2015.

On May 1, the Ternopil Media Center received a letter from YouTube's support service saying that Roskomnadzor wanted to block their video.