People would approach us and say, "Take a photo of us, please, maybe our relatives will see us" – photographer about working in Mariupol 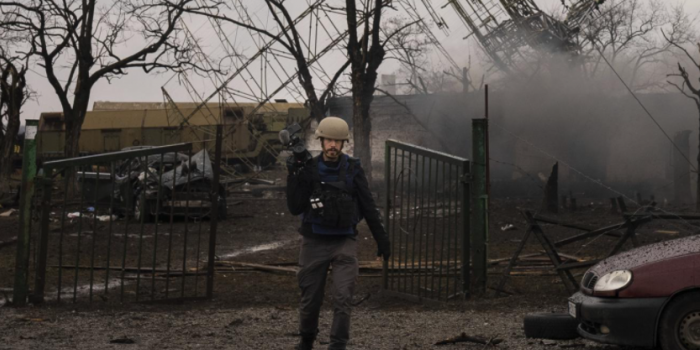 At the beginning of Russia's full-scale invasion of Ukraine, the people of Mariupol paid little attention to media workers; yet, later, they started approaching people with "PRESS" stickers upon noticing them and asking those people to take pictures of them.

Associated Press photo journalist, writer, director Mstyslav Chernov spoke about this in his interview to the Institute of Mass Information.

"They would say, 'Take a photo of us, please; we have no connection – maybe our relatives will see us.' Someone would come up and ask: 'What's the news? Have they already taken Kyiv? Has Kharkiv already been taken? What about the villages around Mariupol?' That is, people saw the "PRESS" badge and just started asking us what the news was," the photographer recalls.

According to Mstyslav Chernov, he had a satellite phone with him, so he would call the editorial office to find out the news and relay it to the locals throughout the day.

"Unfortunately, there were people who would argue with us. Especially in the last days, when people were under such stress, just like animals, you know – no information, no food, no water, no electricity. They were being bombed constantly. And they did not even know whom to vent to," Mstyslav Chernov added.

They are laureates of Freedom of Speech Award from the German media company Deutsche Welle.