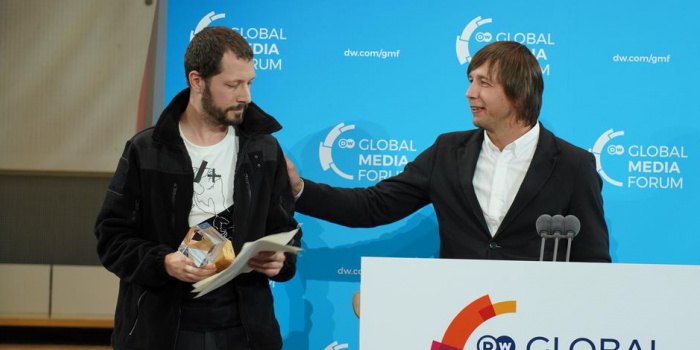 Reporters Yevhen Maloletka and Mstyslav Chernov were awarded the Freedom of Speech Award by the German media company Deutsche Welle during a Global Media Forum conference on June 20, DW reports.

Maloletka, who works as a photojournalist with many international news agencies and organizations, and Chernov, a video journalist with the Associated Press, were awarded the Freedom of Speech Award for their coverage of the war in Ukraine, which russia unleashed on February 24, 2022.

The ceremony of awarding the journalists was the culmination of the first day of the Global Media Forum, an internationally organized DW media forum held in Bonn on June 20-21.

"The works of Mstyslav Chernov and Yevhen Maloletka are hard to comprehend, but what really causes pain is the truth they show: russia attacked Ukraine and its civilian population under a fictitious pretext. Every story has nuances, but the facts can not be refuted. This is exactly what the Kremlin is trying to do: distort the facts and spread false information. The Freedom of Speech award given to Mstyslav Chernov and Yevhen Maloletka commemorates their exceptional courage in opposing propaganda and fake information. It emphasizes that their struggle for human rights and truth is a struggle for democracy and freedom, for all of us, and they are paying a high price for that," said Peter Limbourg, CEO of DW.

The mass media representatives faced the beginning of the full-scale war in Mariupol and showed the world how the Ukrainian city lived under siege by russian troops. Chernov and Maloletka arrived in the city on February 24, the day the russian invasion of Ukraine began. They recorded the destruction caused by the shelling of the city, the work of doctors in local hospitals, and numerous civilian casualties. Journalists left Mariupol on March 15, 2022 in a convoy that moved out when a humanitarian corridor opened.

They also became laureates of Freedom of Speech Award from the German media company Deutsche Welle.