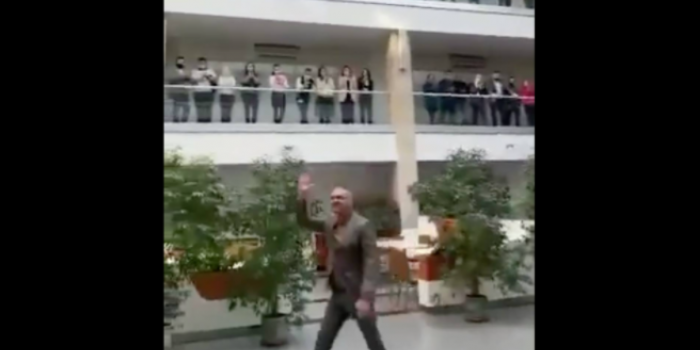 On the recommendation of the Supervisory Board, Igor Telbizov and Oleg Osipov were dismissed from their positions in Ukreximbank: of the Head of the Bank's Banking Security Department and the Head of the Internal Security Department respectively. This decision was unanimously adopted by the bank's board on November 12 at its extraordinary meeting.

The bank's supervisory board appealed to the bank's directorate following the incident, when Telbizov's return was met with applause. This reaction caused public outrage, so the supervisory boards demanded to take measures to immediately terminate the bank's employment with Telbizov and Osipov.

“During the meeting, the members of the Supervisory Board stated that by thier actions Telbizov I. G. and Osipov O. L. proved that they are not able to properly perform their duties under their job description, due, inter alia, misunderstanding of the requirements and provisions of the Bank's Code of Ethics and Corporate Values ​​and the conflict arisen between personal interests and the interests of the bank "- said in a statement.

The members of the Supervisory Board concluded that the continued tenure of Telbizov and Osipov "poses a threat to the entire security system of the bank and to its stable and continuous operation in general, which creates significant operational, compliance and reputational risks."

The Board of the Bank, having considered the recommendation of the Supervisory Board, unanimously decided to immediately dismiss Telbizov and Osipov on the basis of paragraph 2 part 1 of Art. 40 of the Labor Code of Ukraine, namely on the basis of the identified inconsistency of the employee to the position held and the work performed.

As IMI reported, on November 11, two assailants who on order of Yevhen Metzger used force against Skhemy’s journalists on October 4, were reinstated in their positions.

The Minister of Finance Serhiy Marchenko demanded an urgent reaction from the supervisory board of Ukreximbank as to applausing of reinstated in position offenders and the results of the official investigation.

On November 11, Ukreximbank officials said there were no legal grounds to suspend from duty Igor Telbizov, director of the banking security department, and Oleg Osipov, head of the internal security department, who aggressed the TV crew of the Skhemy program on October 4, despite their status as defendants in criminal proceedings.

The actions of two other employees of the bank, namely the head of the Department of Banking Security and the head of the Department of Internal Security of Civil Protection and Security of the bank are qualified by h.h. 1, 3 st. 171, part 1 of Art. 126 of the Criminal Code of Ukraine - illegal seizure of information the journalist collected and technical means he used for his professional activity, influencing in any form a journalist in order to prevent him from performing professional duties committed by an official using one's official position; intentionally committing acts of violence that caused physical pain and did not cause bodily harm.