Freedom of Speech Barometer for December 2019

In December, IMI experts recorded a total of 17 cases of violations of freedom of speech in Ukraine. Of these, 13 were facts of physical aggression. These are the findings from the monthly monitoring "Barometer of Freedom of Speech" that.the Institute of Mass Information held during last December.

The main violations of journalists' rights in December were obstacles to work (six cases) and beatings and threats (3 cases respectively).

The journalist with Hromadske Victoriya Roshchyna and cameraman Oleksiy Nikulin were injured on December 17 amid clashes near the Verkhovna Rada building, the journalists suffered from with tear gas, which was used by the riot police and protesters. Also someone knocked out the phone from the hands of the journalist, as she was filming the clashes. The protesters threw the tent bars at the journalists. Another journalist, working for Radio Svoboda Serhiy Nuzhnenko also got some injuries, the National Guard and police officers broke his camera and glasses as well. The incident occurred, as the journalist was covering clashes between the law enforcement officers and protesters under the Verkhovna Rada due to new bill on farmland market to be voted in the parliament.

The editorial staff of the online edition of ZAXID.NET claimed about threats and attempts to obstruct work of its journalist. “I learnt about a threat to my and my family’s life. Threats came from members of nationalist assocoaitions and were related to the edition which I work for. On December 12, the same persons broke into the administrative room where the Lviv City Council held a meeting. They demanded to remove some publications on Zaxid.net about some would-be paid-for actions of protest. Today, they claimed that they were tracking my place of residence and where my children were studying, ” Andriy Drozda said. Another journalist for Zaxid.net, co-author of the resonant investigations into the activities of members of the mentioned groups, Marta Kohut, received the same threats due to her professional activity.

Also IMI identified two cyber attacks against mass media editions. In particular, the Ternopil online edition of Politerno claimed about DDoS attacks. The editorial board related the hacker attack to some critical publication that appeared on the site on November 30, which spoke of eventual staff assignments in Ternopil Regional State Administration. There was also a hacker attack against the “1+1” TV channel servers, which caused some technical failures.

IMI fixed one fact of violation in each of the following categories: property damage and break-ins against the editorial offices, legal pressure and search. 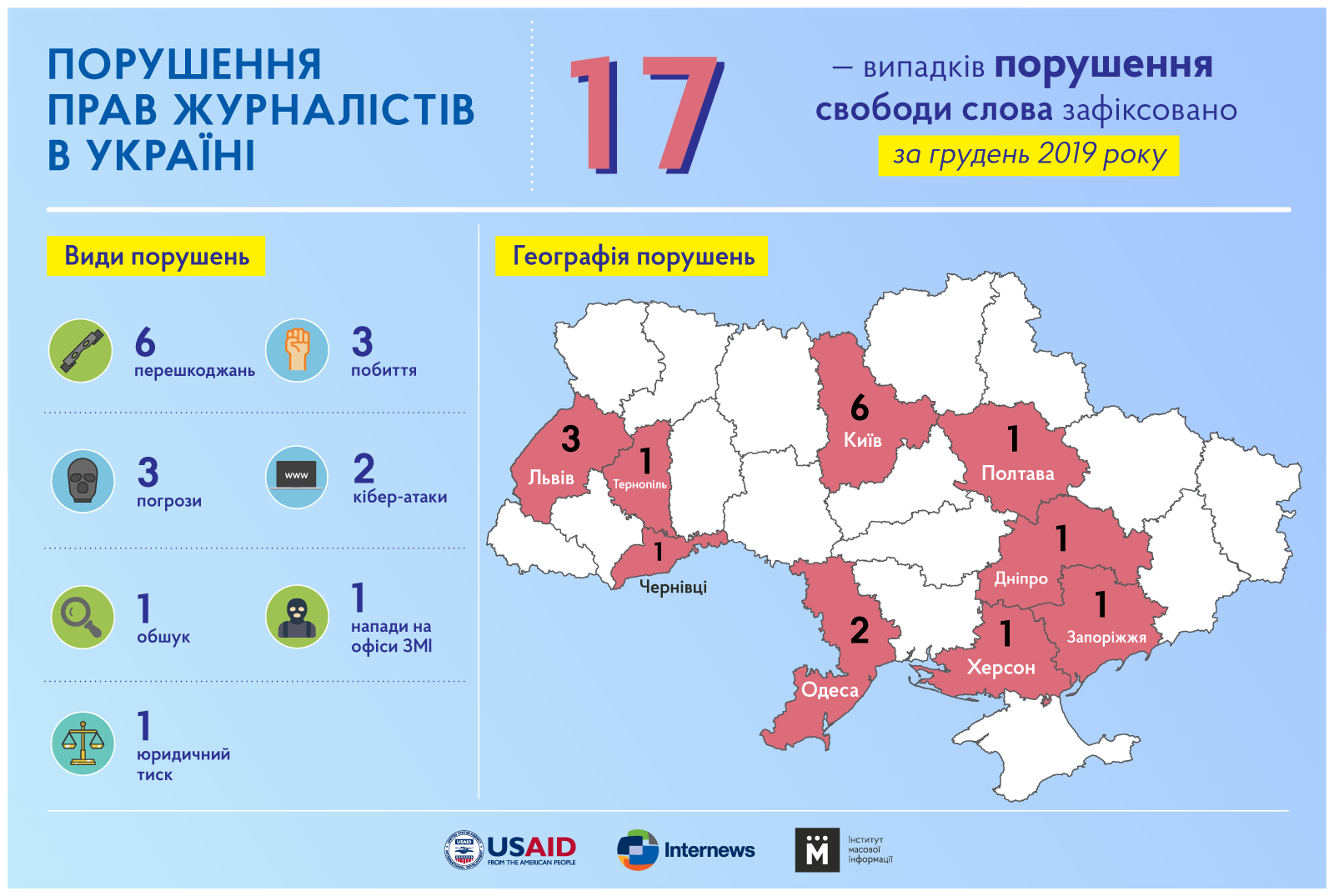 Thus, the National anti-corruption bureau (NACB) staff conducted search in the premises of Dumskaya TV in Odessa, preventing the staff of the TV channel to work. The management of the channel considered the search as politically motivated and said that was crackdown on freedom of speech.

For its part,  the National Anti-Corruption Bureau said that the searches on Dumska Channel were in no way related to the activities of the mass media. Investigative actions are being conducted within the framework of the investigation of possible abuses of Odessa Regional Council officials during the sale of non-residential premises in September 2018.

However, Dumska reported that during a search of the editorial office of Dumskaya TV, employees of NABU did not seize any documents, but seized records from video surveillance cameras and a memory card of the channel cameraman who recorded their actions.

The search on the broadcaster’s office coincided with the statement of the Odessa journalists who claimed there was no guarantee of security for their work. They complained as well of inaction of local officials as to the issues of protection of freedom of speech and dignity.

IMI reported violations of freedom of speech and rights of journalists in nine regions of Ukraine. Most violations occured in Kyiv : six cases, three cases  occured in Lviv region and two cases occurred in Odesa region. Some other regions had one case for each (Ternopil, Chernivtsi, Poltava, Dnipro, Zaporizhzhya, Kherson regions).