Journalists for Hromadske got injured in clashes near parliament 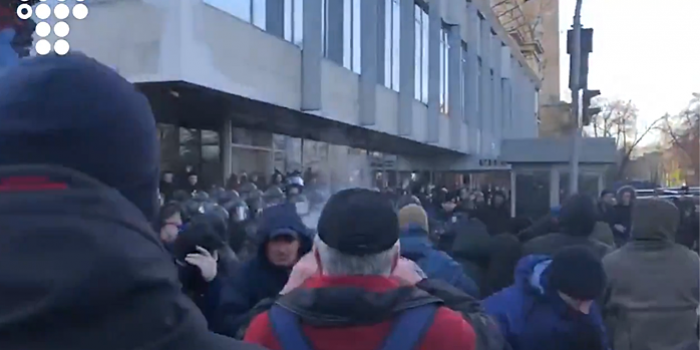 The journalist with Hromadske Victoriya Roshchyna and cameraman Oleksiy Nikulin were injured on December 17 amid clashes near the Verkhovna Rada building, as Hromadske reported.

In particular, the journalists suffered from with tear gas, which was used by the riot police and protesters. Also someone knocked out the phone from the hands of the journalist, as she was filming the clashes. The protesters threw the tent bars at the journalists.

On December 17, the protesters rallied before to the parliament building opposing the adoption of a bill on the sale of farmland.

The rally was organized by a number of political forces, including the “Svoboda", “Batkivshyna”, " Agrarian Party "and" National Corps ". According to the police, 1.5-2 thousand persons gathered there.

On November 13th, the MPs have previously backed the farmland market bill. According to the bill, the land market is proposed to be launched from October 1, 2020. The project bans purchasing of farmland by legal entities, the beneficial owners of which are foreigners and persons destitute of nationality,  until January 1, 2024.