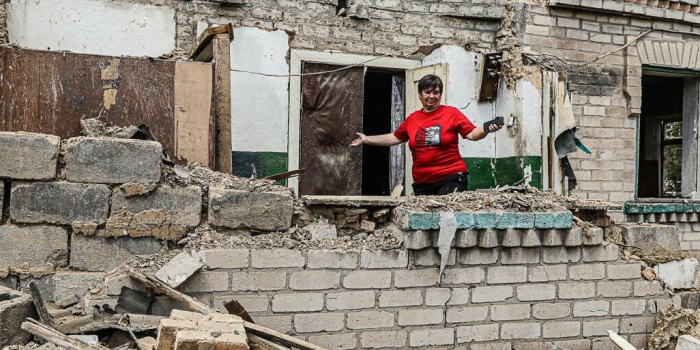 The destruction that occurred as a result of russian shelling on May 25, photo: 061.ua

In Zaporizhzhia, law enforcement officers prevented journalists from several media outlets (061.ua, Channel 1 and Channel 5 correspondents) from filming civilian facilities destroyed by russian bombing. Journalists arrived at the scene a few hours after the bombing, but were not allowed to film.

This was reported by Zaporizhzhia journalists to the IMI representative in Zaporizhzia region.

We remind that on May 25 at about 5 am, four russian missiles were fired on Zaporizhzhia. One missile was shot down by Ukrainian air defense. The bombing has damaged one industrial facility, a bank, one of the largest shopping malls and more than 60 private homes in two parts of the city. Three hours after the bombing, journalists arrived at "Aurora" shopping mall to film.

According to 061.ua photo correspondent Kateryna Klochko, the police did not allow them to film on the spot, even the long shots. “We were there at about 8 am, standing in front of the ribbon that surrounded the mall, but filming from behind it was also not allowed. The police did not allow us to film even the houses nearby, where the windows have been blown out," she said.

Also, according to Klochko, the situation happened to them again near the private sector in another area which was badly affected by the missiles:

The journalist also noted that they had waited for more than an hour for a permission, but only were able to get it when they called the spokesman of Zaporizhia Regional Military Administration, Colonel of the Armed Forces of Ukraine Ivan Arefyev. "We saw him there and started calling. He allowed those of us who were holding cameras to film near the shopping mall. We also called him in the private sector, he was there and escorted us. But it wasn't right away, we waited for about an hour near the shopping mall, and at least two more hours in the private sector," said Kateryna Klochko.

Channel 5 journalist Denis Rozenkov said that he and the cameraman were near "Aurora" shopping mall at about 7 am, then other Zaporizhzhia and foreign media outlets arrived. "Before leaving, the head of ZRMA told us, 'Please shoot from a distance while the investigative actions are ongoing.'" In fact, we did not manage to do this. I fully support the work of the police and the Security Service who detained all "onlookers" and forced them to delete the videos from their phones. But we are not "onlookers." We have certificates from the Ministry of Defense, some of us have taken courses at the department, where they taught us what, where, when and after what time things may be shown on air, what can and should be filmed. We have papers from the JFO, which are issued by the SSU only in the capital and in Kramatorsk. We have editorial certificates and passes from ZRMA. But Zaporizhzhia policemen and SSU officers repeatedly offered some of us to, excuse me, shove those certificates up somewhere to those who issued this document to the reporters," said the journalist.

According to him, it was forbidden to shoot anything until about 10.30. “Ruslan Tkachuk, a spokesman for the Defense Forces of the Zaporizhia Region, was at the site of the bombing of the mall. I personally heard them send him, excuse me, to hell, too, and tell him to look for ZRMA spokesman Ivan Arefyev. It is good that we managed to call Ivan, who finally took the cameramen and photographers to see the place. At that time, the picture we had was quite weak, because the avenue had been almost entirely cleaned up, as there were no people working in public utilities, rescuers and other services near Aurora," the journalist said.

According to Denis Rozenkov, in the private sector, they were forbidden to film even on the streets that go parallel to the place where the missile had hit. “It is very annoying that there is a clear time frame, there are rules about what we do not show and what we do not talk about, but we still need to do our job. Namely, we need to show that the city is not just fighting, but that it has rescue services that, for example, put out fires. There are communal services that clean up the rubble, there are many other things. In the end, we filmed it all secretly, from a car or in some other way, which is simply unacceptable in these conditions," the journalist said.

IMI lawyer Roman Holovenko considers such actions as interference with journalistic activity. “The state has not established a clear regulatory ban on filming the places where the missiles hit. However, there is a joint statement from the Ministry of Culture, the Ministry of Defense and the media, but it also says that 'journalists can gather information on the ground immediately after the shelling. At the same time, publishing photos and videos of the events taken by media representatives and journalists at the site of hostilities is allowed after 12 hours in the case of military facilities, and after 3 hours in the case of civilian facilities," said the IMI lawyer.

As IMI reported, on March 28, Ukrainian and foreign journalists, as well as media and public organizations and movements, called on the authorities to take immediate steps to end the harrassment of journalists and to work out clear regulations for covering russian shelling attacks.