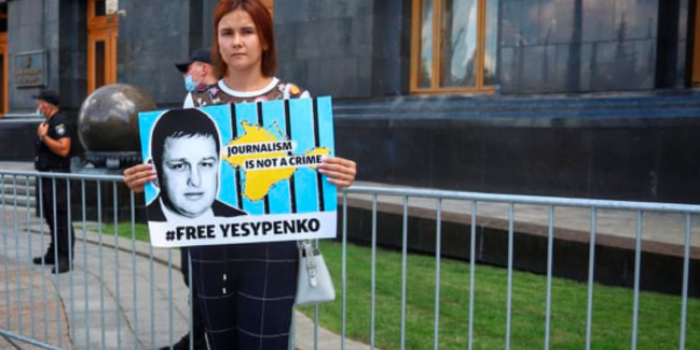 The health condition of Vladyslav Yesypenko, freelancer for Radio Liberty (a project of Krym.Realii) arrested in the occupied Crimea, has deteriorated, as Krym.Realii reported.

His wife, Kateryna Yesypenko, related it to the tortures inflicted to him. As Kateryna Yesypenko told, his husband’s urolithiasis worsened. He was not provided with the necessary medical care in the pre-trial detention center, so about a week ago, he was taken to a civilian hospital by ambulance.

"After having been tortured, Vladyslav's health, of course, has deteriorated. I am worried of his blood pressure, aggravated urolithiasis, he began to see poorly. The doctor of superior expert category, doctor-urologist of the metropolitan clinic "Harmony of Health" Mikhaylo Trofimov said that when the person was diagnosticated with urolithiasis and when he had calculus in his kidneys, any blow to abdomen could make calculus passing to the ureter, disfunction of urine drainage from the kidneys and subsequent obstructive pyelonephritis associated with severe pain, ”said Kateryna Yesypenko.

Kateryna Yesipenko had previously claimed that her husband had been forced to testify by resorting to torture.

On July 6, a Russian court in the occupied Crimea extended the arrest of Vladislav Yesipenko until December 18.

On July 15, in the Russian-controlled Simferopol District Court, a Russian prosecutor announced an indictment in the case of Radio Liberty journalist Vladislav Yesipenko. He is charged under Articles 223-1 (illegal manufacture of explosives, processing or repair of explosive devices) and 222.1 (illegal acquisition, transfer, sale, storage, transportation or carrying of weapons, their main parts, ammunition) of the Criminal Code of Russia.

On April 12, Ladin reported that in the first days after his detention, the FSB had illegally taken saliva from Esypenko for a biological examination.

As IMI reported, on April 6, Vladyslav Yesypenko said that FSB investigators had tortured him. He said this on April 6 during a session of the Supreme Court of Crimea.