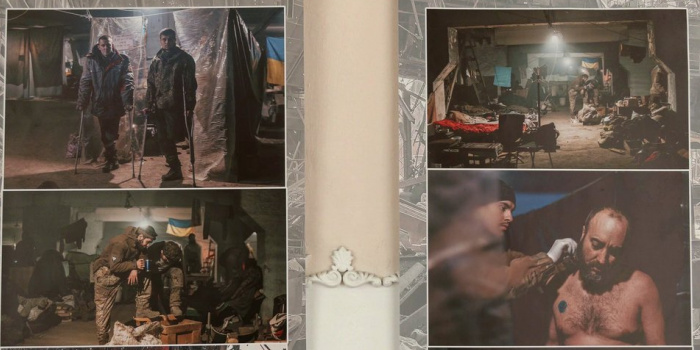 On September 22, an exhibition of photos by Dmytro Kozatskyi, Azov Regiment fighter with the call sign Orest, opened at the Rivne Institute of Postgraduate Education, Suspilne reports.

Dmytro Kozatsky took the photos while being surrounded in the Azovstal plant in Mariupol. Dmytro was born in Zhytomyr oblast, and his connection to Rivne Oblast is him being a student of the Ostrozky Academy.

This is not the first presentation of his photos from the Azovstal underground, noted the exhibition's curator, photo artist from Rivne Oleksandr Kharvat. They have already been exhibited in Rivne, Dubno, and Zhytomyr. The exhibition has also been opened in Cyprus.

"I was shocked, I didn't expect that from the Cypriots – seeing as we know from the media that their government does not really support the sanctions against the Russian Federation – but they were shocked by these photos. They say they were looking at them with tears in their eyes, I saw the reaction of the Cyprus citizens. Now we are presenting them here at the Institute, then the exhibition will go to the Ostrozky Academy. I believe that these photos — by Dmytro, and other photos about the war – should be present in the information space constantly," says Oleksandr Kharvat.