While we were showing the UAF's success to the world, OC "South" press service was giving interviews threatening to strip all journalists who got to Kherson of accreditation – Safarov 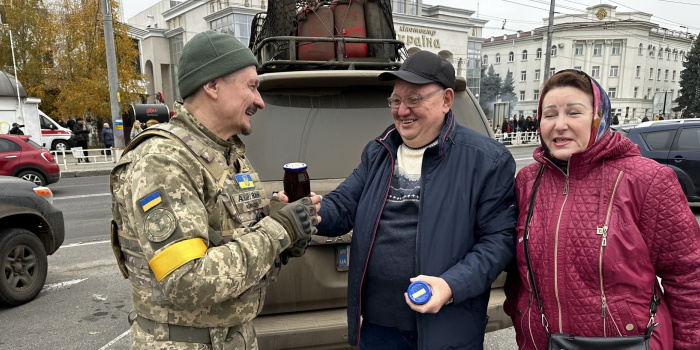 Local Sky News producer Azad Safarov spoke about trying to get to liberated Kherson and having his media stripped of accreditation. Azad Safarov wrote about this on Facebook.

According to him, on November 11, the day the Armed Forces liberated Kherson, his team was 20 km away from Kherson along with other media agencies and channels.

He and his colleagues called everybody who is in charge of the southern axis, but were told that they were not allowed to go to Kherson.

"We didn't need any exclusive content, we just needed not to miss the moment of sincere joy among the people meeting the UAF. On November 12, we realized that there was no point in waiting for a miracle from OC "South" any longer. Their press center managers are quite far from being experts on journalism and communications. Throughout the last months of the war, they have been talking to journalists as if they were local nobles giving audience to their servants. Every time I call their management, I have to listen to diatribes about what awful journalists we are, how we are hunting for exclusives, how everybody is under fire because of us, etc., etc. That is, these people are on the state's payroll, and instead of making use of the media to advertise the UAF and the country for free, they destroy all communication with the world with their own hands. With one hand they are asking the world to help us, and with the other they are destroying our communication with the world," Safarov stressed.

According to him, after being refused, he and his colleagues contacted the top officers directly; the officers agreed to take the media workers there right away.

"While we were showing the UAF's success to the world, OC "South" press service was giving interviews left and right, threatening to strip all journalists who got to Kherson of accreditation. To say that such actions reek of archaic Soviet incompetency is an understatement. In the pic, you can see the response from one of the heads of this area's press service: 'You have created tension in the media environment.' Seriously?? tension? Is that all you were able to come up with? The funniest thing is that on the same day as we and other journalists entered Kherson, OC "South" was also posting videos and photos from the city. But, of course, they were not creating media tension. Because surely they know more about communications than Sky News, CNN, hromadske.ua, Ukrainska Pravda and others," Azad Safarov remarked.

He also pointed out that according to OC "South", Kherson was dangerous on November 12, and journalists were not allowed there, but that same press center took 300 journalists there as soon as November 14.

"And this is despite the fact that on November 14, you could still hear our artillery working in the city, and it was still mined by the ruscists," added Safarov.

He expressed gratitude to his colleagues and to the Institute of Mass Information for their support, adding that without them "there would be no backlash."

"All journalists – both foreign and Ukrainian – must receive their accreditation back. The cooperation with mass media must be clearly regulated: 1 accreditation for all kinds of work in Ukraine. There cannot be a hundred thousand additional permits, accreditations, emails, text messages, negotiations. This is simply nonsense. No one should be putting spokes in the work of the media," wrote Azad Safarov.

In his comment to an IMI representative, he said that he appealed to both the military command and the country's leadership with the demand to restore the accreditation.