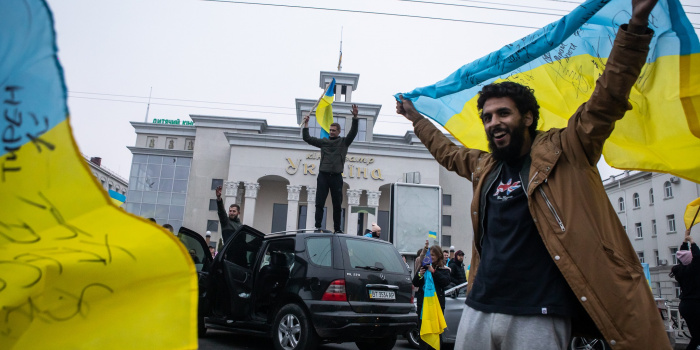 "I just found out that I have been stripped of the Ukrainian Armed Forces accreditation as well, for yesterday's photos from Kherson," Dmytro Larin wrote on Facebook.

In his comment to an IMI representative, he noted that he did not know the details, because the cancellation letter arrived to the address of his colleague who had helped him get the accreditation.

Regarding getting his accreditation restored, he noted: "I can't tell you anything, the editors know about this and will probably deal with it in the coming days."

Photographer Yevheniy Zavhorondiy added the photos he had taken in liberated Kherson to his post about having his accreditation revoked.

"Photos about a great victory and a personal loss. In these pictures, you see the joy of Kherson people meeting their liberators. And what I see is a letter from the Armed Forces that I received this morning, stripping me of my accreditation for a 'gross violation.' I hope the situation will somehow be resolved, because we're all in this war together, and it is an information war among other things," the photographer wrote.

In his comment to IMI, he said that he had received a letter saying that his accreditation had been revoked.

When asked about restoring the accreditation, Zavhorodniy said: "We will do something, but I don't know for sure what it will be yet."