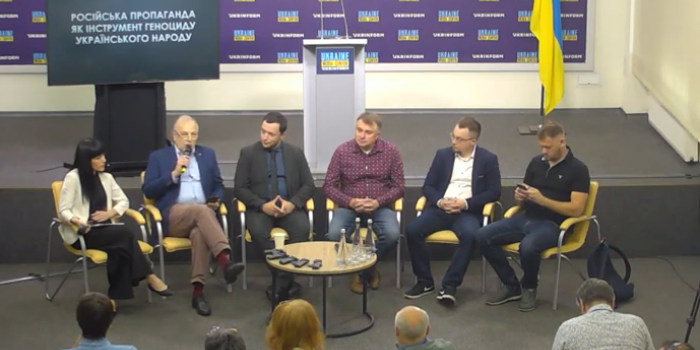 Ukrainian journalists call on the authorities to initiate sanctions against russian pseudo-journalists and to start the documenting of their crimes in order to bring them to justice.

This is stated in the journalists' address to their colleagues, public authorities, and the international community, which was published on June 22 in Kyiv at a media workers meeting "russian propaganda as an instrument of genocide of the Ukrainian people. Detection and exposure methods." The address was published by the Ukrayinsky Tyzhden magazine.

In the address, the journalists call on their colleagues to unite for an important purpose, despite the disputes, insults, and competition. They believe that those who call themselves journalists, military correspondents, or bloggers and help politicians and military commanders to fan the fire of war against Ukrainians should be held accountable for their crimes.

The authors of the address note that these people are not the press, but soldiers of the information war and therefore should be held responsible for their complicity in the russian aggression against Ukraine.

"Syria, Georgia, Azerbaijan, Ukraine, Africa – wherever putin's regime has brought war and suffering, these people cooperate with the russian secret services, clearly following their orders. They are instructed on how to cover political topics and they have supervisors, they generate dozens of fakes, wear military uniforms, have weapons and openly take part in battles. For which they later receive military awards. These people sometimes complain about harassment of the press, talk about freedom of speech, but in reality, in their words is mere propaganda, direct calls for the extermination of Ukrainians and support for war crimes. In fact, they are but soldiers of the information war, so they should be held accountable for complicity in the russian aggression against Ukraine," the appeal reads.

We are talking about genocide and crimes against humanity, which have no statute of limitations, the address says. The authors of the address remind that history has examples of propagandists taking responsibility for their crimes – the editor of the Nazi newspaper "Der Sturmer" Julius Streicher and heads of the Rwandan "Radio of the Thousand Hills."

"We call on the Ukrainian authorities to begin the process of documenting the crimes of russian propagandists and to bring them to justice. Their own Nuremberg awaits them. We call on the Ministry of Culture and Information Policy, as well as all relevant state bodies and services, to initiate sanctions against russian pseudo-journalists. The whole world must join in imposing sanctions against the occupier's allies and do everything possible to bring them to justice for calling to wage an aggressive war and facilitating the genocide in Ukraine," the appeal reads.

The petitioners also call on their colleagues in Ukraine and throughout the free world to join the fight "against these propagandists who are helping the russian army to destroy Ukrainians."

"Join our call, record your own video addresses, support us on social media. Join our common fight! We emphasize: the information staff of the criminal russian regime is #NotThePress, they are just trying to hide behind this title. This is #FakeJournalism – and they should get the punishment they deserve," the address reads.

As IMI reported, on May 12, Ukrainian journalists and human rights groups called for the exclusion of hosts who have previously played along with the enemy's rethoric and used to spread kremlin propaganda for many years. This was about Vasyl Holovanov, Tigran Martirosyan, Natasha Vlashchenko, Tetyana Honcharova, Nazar Dovhyy, Volodymyr Poluyev, Anna Stepanets, Anastasia Dauhule.

Yet, the Ministry of Culture and Information Policy of Ukraine opposed the exclusion of pro-russian hosts from the telethons.

Media groups also sided with the TV hosts. "Inter" TV channel stated that they had no doubts about the pro-Ukrainian civic stance of their host Anastasia Dauhule. This has also been stated by "Media Group Ukraine."

The address has been signed by over 326 journalists, media, NGOs and movements. 27 people from "Media Group Ukraine," in particular from Ukraine and Ukraine 24 channels, have signed the address.

A petition to suspend the hosts who used to support kremlin propaganda from any telethons has been registered on the Cabinet's website.