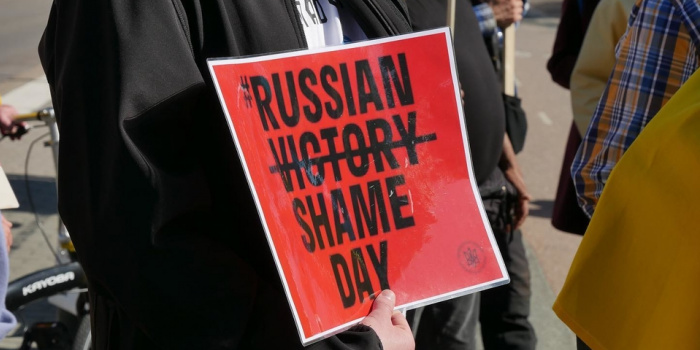 Demonstration against russian propaganda and war in Ukraine, May 9, Göteborg, Sweden, photo: @vyacheslavturovski

326 journalists, media outlets, NGOs and movements have signed an appeal to the President of Ukraine, the Minister of Culture and Information Policy of Ukraine, and the National Council on Television and Radio Broadcasting calling for the exclusion of pro-russian propagandists from national telethons and other media marathons.

It should be noted that 27 people from the Media Group Ukraine, in particular, from "Ukraine" and "Ukraine 24" channels, signed the appeal. It is on these channels that some of the pro-russian hosts mentioned in the appeal are currently employed: Natasha Vlashchenko, Vasyl Holovanov, Tigran Martirosyan, Anna Stepanets, and Volodymyr Poluyev.

It will be recalled that these hosts had previously worked for Viktor Medvedchuk and Yevhen Muraev on their NewsOne, ZIK, 112 Ukraine, and NASH channels.

As IMI reported, on May 12, Ukrainian journalists and human rights groups called for the exclusion of hosts who have previously played along with the enemy's rethoric and used to spread kremlin propaganda for many years from the national telethons and other media marathons that call themselves "national."

On May 13, the Ministry of Culture and Information Policy of Ukraine opposed the exclusion of the pro-russian hosts from the telethons. The Ministry believes that today is not the time for public lustrations and incitement of conflicts within the country and the professional journalist community. The MCIP advises to pay attention to the position taken by the listed pro-russian hosts during the war instead.