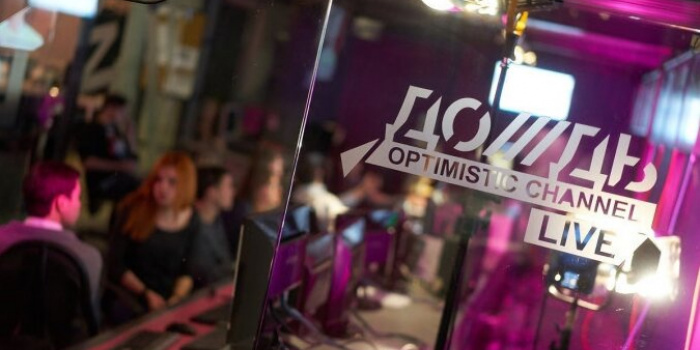 Namely, these are hosts Margarita Lyutova and Vladimir Romensky, as well as journalist Darina Lukutina.

Lyutova and Romensky said that they consider Korostelyov's dismissal a mistake.

"Whatever the reasoning behind it, his [Korostelyov's] dismissal seems to me to be a big mistake. For me, 'Dozhd' has always been about humanism, openness, and honesty. I believe that the channel's public response goes against all three of these simple principles, even if it was done out of necessity," Lyutova said.

Romensky noted that he had been personally involved in the production of the broadcast that led to Korostelyov's dismissal. "I was on the earpiece as the editor-in-chief. Duty says I should put the badge and the gun on the table. Which is what I'm doing," he explained.

Darina Lukutina noted that she does not understand "how could they sacrifice an employee to please some state (Latvia – Ed.) even before this state demanded such a sacrifice."

Korostelyov himself said that he agrees with the dismissal if it helps to save the channel from being closed down. He also explained what he meant on the air: "Do I feel sorry for the hungry conscripts abandoned by everyone (which is who we were talking about)? Yes. Is Putin awesome? No. This is about where the divide seems to go. Am I helping the conscripts I mentioned in that monologue? Only by spreading the word about them."

As IMI reported, on December 1, host of the "Here and Now" program (TV channel "Dozhd"), Alexei Korostelyov, invited the viewers to inform them about the problems Russian soldiers are facing on the front line and expressed hope that the channel had been able to help a lot of soldiers with equipment.

After the excerpt went viral online, the TV channel's editor-in-chief Tikhon Dziadko said that it had been removed from the broadcast and that "Dozhd" "did not, does not, and will not engage in aiding the Russian army with equipment, on the front line or elsewhere."

The National Electronic Media Council of Latvia fined the Russian TV channel "Dozhd" 10,000 euros for displaying a map which shows the occupied Crimea as part of Russia and calling the Russian army "our army".

The Minister of Defense of Latvia, Artis Pabriks, spoke in favor of revoking "Dozhd's" license (the channel had moved to Riga with the start of Russia's full-scale invasion of Ukraine).

On December 2, the State Security Service of Latvia (VDD) started an investigation into the statements made by Alexei Korostelyov regarding the channel's assistance to soldiers of the Russian occupation forces.