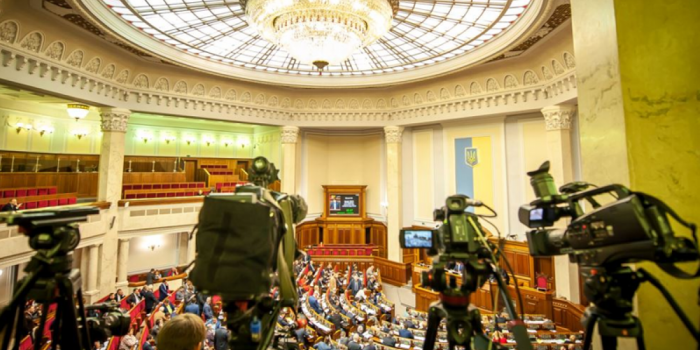 The Verkhovna Rada should provide journalists with full access to live broadcasts of its plenary sessions, as a ban on it would increase the government's control over information and limit the transparency of the Parliament's decision-making.

Such opinion was expressed by IMI lawyer Roman Holovenko in his comment on the Parliament adopting the resolution No. 7739, according to which Rada TV channel will not be broadcasting the Verkhovna Rada's plenary sessions for the duration of martial law.

According to Holovenko, it seems strange that the issue of the parliamentary sessions's safety is being assigned to the media sphere, and not to the military or the VRU leadership, who should be the first to know the security situation in the Pechersk Hills at a specific moment.

"With live broadcasts of VRU sessions unavailable, a single specific TV channel – Rada – gets a disproportionate monopoly over the coverage of events in the Parliament," the lawyer noted.

He reminded that, according to Part 5 of Art. 4 of the Law "On Television and Radio Broadcasting," "the state establishes effective restrictions on the monopolization of television and radio organizations by industrial, financial, political, and other groups or individuals, and also guarantees the protection of television and radio organizations from financial and political pressure from financial and political groups, as well as state authorities and local self-government bodies."

"Such an advantage of one channel may be eliminated if Rada channel simply films the Verkhovna Rada's sessions (without journalist comments and only omitting the parts related to security issues) and later sends the footage out to other media. From that moment on, there could be a several-hour embargo on the distribution of the according information (in particular, for the Rada channel), so that all media are on equal terms. Another option is to allow journalists from the national news media (in particular, TV channels already participating in the United News telethon) to the VRU sessions, prohibiting them from spreading the information a few hours," said Roman Holovenko.

As IMI reported, on September 6, the Verkhovna Rada adopted a resolution №7739 "On some issues regarding the coverage of the work of the Verkhovna Rada of Ukraine of the ninth convocation under martial law," which stipulates that for the duration of martial law, state enterprise "Parliamentary TV Channel Rada" may limit the live broadcasts of the Verkhovna Rada's open plenary sessions out of national security considerations and in order to ensure the VR's safety measures.