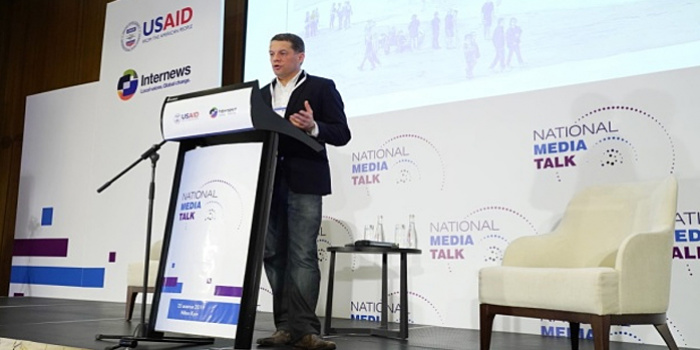 Ukrinform journalist Roman Sushchenko urged colleagues to be cautious when they cover the topic of political prisoners' release and not to spread fakes that could harm their families. He said it on October 25 during a National Media Talk forum, as Ukrinform reported.

“Fake technologies are post-truth technologies, they are legitimized in public space. My family and I personally, we became the victims of such fakes at the last stage of our return as political prisoners from captivity. In particular, the press reported that swap would be scheduled for August 29-30. I know that many of the journalists have got their things, cameras, dictaphones and even went to the airport yielding to not very much credible information. Thanks to mass media, this information was disseminated, and my mother, when she knew it, she was worried because her hopes had been deferred for another time (it was the sixth attempt of the kind), she got sick, ” as Sushchenko said.

At the same time, he emphasized that the consequences of this fake news were terrible.

“When I got home and talked with my mother by phone, she couldn't even speak, and in a few hours I had to tell her what was really on. That’s why, on this example, I urge journalists to be careful, especially in the context of coverage of events related to political prisoners, as otherwise t may be harmful to their relatives, it may cause more pain and anguish,” Sushchenko said.

Sushchenko told, the best way to combat manipulation and fakes is to "comply with the standards of journalism that are well-known and not to forget the Code of Ethics."

"It seems to me that in order to avoid being manipulated and easy to led, one must develop the ability to analyze information, to stop passively observing the course of events, and to search and analyze facts even when you do not like it, to use different sources," the journalist said.

At the same time, while addressing his colleagues, he thanked them for support of Ukrainian political prisoners, and expressed hope that this topic would go on being important for Ukraine mass media.

IMI reported, on September 7, 2019, Ukraine exchanged prisoners with Russia in the "35 by 35" format. Twenty-four POWs and political prisoners have returned to Ukraine , including film director Oleg Sentsov and journalist Roman Sushchenko.