From September, journalists not allowed on parliament’s sidelines 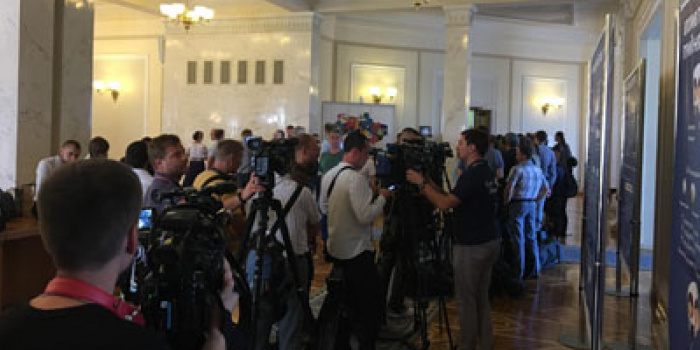 Journalists were to return to work on the sidelines of the Verkhovna Rada, as a new plenary session starts on September 1st, but the deteriorating epidemic forced the parliament's leadership to abandon the idea. The Chairman of the Verkhovna Rada Dmytro Razumkov said it on August 23 at the at a press briefing, as Interfax-Ukraine reported.

"We have talked about it on several occasions. We hoped that the number of cases would decrease, but you can see that last week, the figures exceeded 2 thousand patients a day. Frankly, we hoped that since the beginning of the plenary session (from September 1, 2020. - Ed. ) we would be able to re-admit journalists on the sidelines, but for the time being, we maintain a pause, because you see what the statistics are, " Razumkov said.

The Speaker of the Parliament noted that when the coronavirus pandemic situation will get better, journalists will be able to return to work on the sidelines of the Verkhovna Rada

As IMI reported, on June 1, the Verkhovna Rada has allowed access to the journalists to the press box on the balcony of the parliamentary session hall, which had been closed during the lockdown. Access for cameramen and photojournalists is limited to 30 people.

On May 28, the chairman of the parliament, Dmytro Razumkov, amended the March 12 the Order “On Additional Measures to Prevent incidence of Acute Respiratory Disease”. According to the order, from June 1, media representatives are allowed to the press box of the balcony of the Verkhovna Rada meeting hall, in the order of arrival, and their total number in this box may not exceed 30 people.