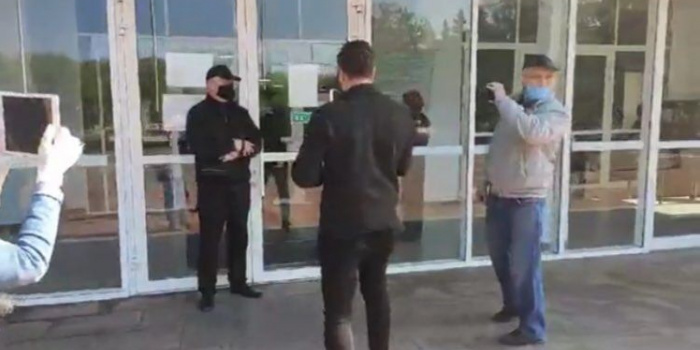 On May 27, a number of journalists were denied access to the session of the Kryvyi Rih municipal Council, officials failed to provide any well-grounded explanation, as Detektor Media reported.

The police did not react to the actions of security guards. When the journalists asked the police to intervene, they replied that the journalists could file complaint. According to Detector Media, the complaint was lodged by blogger Oleksander Likarenko. The edition is expecting confirmation of this report from the Kryvyi Rih Police Department.

The elected members of the municipal council deputies Mykola Dektyaryov and Serhiy Popovych inquired the Secretary of the council Serhiy Malyarenko about denial of access for the press. Malyarenko mentioned coronavirus and said that the journalists could watch the online broadcast of the sitting. He did not cite any document statuating the ban for the press to attend the meeting.

This is the second incident of the kind during lockdown period. On April 22, representatives of the Kryvyi Rih Municipal Guard pushed Sofia Skyba, editor-in-chief of Pershyy Kryvorizskyy news agency, and journalist Maksym Bovchalyuk out of the Kryvyi Rih municipal council, where the standing commissions were meeting. They addressed issues related to the allocation of land for the construction of religious buildings and the transfer to private ownership of real estate in the historic center, the issue of redistribution of funds aiming to counter coronavirus. The session of the city council was held in the inner yard of the council building. The territory of the backyard of the city executive committee can allow journalists to work without hindering each other.

The police then opened criminal proceedings for obstructing the professional activities of journalists (Article 171 of the Criminal Code of Ukraine), but within a month no one was declared a suspect.