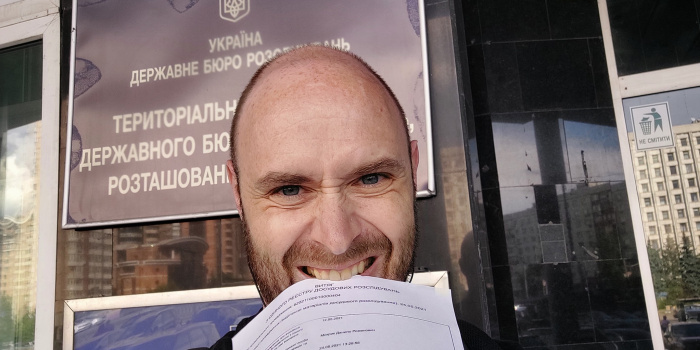 The State Bureau of Investigation started proceedings over the case of obstruction to professional activities after the complaint filed by the journalist Danylo Mokryk, as he said on 7 of June, as “Detektor Media” reported.

The incident happened on May 12, in Kyiv, when police officer Yuriy Ruzanov did not allow him and other journalists to attend thesis defense of Ilya Kiva, a MP from the “Opposition Platform - For Life” party.

"Between my teeth, I have an extract from the Unified Register of Pre-Trial Investigations in the criminal proceedings due to denial of access for me to defense of Ilya Kiva's thesis. Denial of access was performed by the policeman Yuriy Rusanov who figured out to demonstrate his police badge # 0026755. This is not for the first time that the police office Rusanov is loyally defending Illya Kyva. But this time, it seems, he had it coming ", - the journalist told.

Mokryk added that he had already been interrogated over the case at the Territorial Department of the SBI in Kyiv.

As IMI reported, on May 12, Bihus.info journalist Danylo Mokryk said that the State Bureau of Investigation denied to open proceedings on his complaint over the case.

As IMI reported, the State Institute for Training of the State Employment Service of Ukraine, where People's Deputy Ilya Kiva defended, acknowledged that despite the requirement of open-door thesis defense, the MP’s assistants set up "accreditation" for the press, and security guards did not come between the hugs for hire and the journalists.

On April 26, Danylo Mokryk was not allowed to attend the thesis defense of a MP Ilya Kiva. The journalist reported about it to IMI.