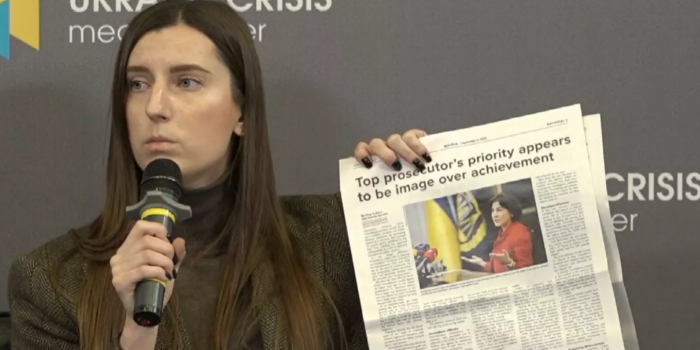 Prosecutor General Iryna Venediktova and MPs from the Servant of the People made pressure on Kyiv Post weekly. Former journalist of the publication Anna Myronyuk said this during a round table held at the Ukrainian Crisis Media Center, as Detektor Media reported.

Anna Myronyuk noted that in November 2020, the Kyiv Post came out with a story slamming the Prosecutor general IrynaVenedyktova. After the publication, the Prosecutor General summoned Brian Bonner to her office.

"She condemned the criticism and threatened to seize the court," the journalist said.

Then this row was somehow resolved, it subsided and turned to be a frozen conflict, said Anna Myronyuk.

“A year has passed. Journalists from the Kyiv Post published another slamming text on the progress of the reforms and the work of the Prosecutor General, where they cast doubts as to its effectiveness. Afterwards, some time passed, and, according to Brian Bonner, Ms. Venedyktova opened some investigations against Adnan Kivan, which she then closed. That's what I'm saying from Brian Bonner.

Ms. Venedyktova had the opportunity to speak, she published op-eds in our weekly. To publish the both stories, we sent requests to the Prosecutor General's Office requesting an interview. Moreover, after the first article and the pressure she made on the newspaper, we have been always making attempts to persuade the Prosecutor General's Office to grant us a long interview and give the Kyiv Post’s journalists the opportunity to ask all the questions, give her the opportunity to speak out and respond to our criticism. She did not take this opportunity. We found ourselves in a situation where there was pressure from the authorities, it was at different levels. There were certain MPs from the "Servant of the People" who threatened to seize the court after certain publications we made. The pressure did exist, and I can only state the happening, ”Anna Myronyuk said.

As IMI reported on 15th of November, 30 dismissed employees of the English-language Kyiv Post are launching a new project.